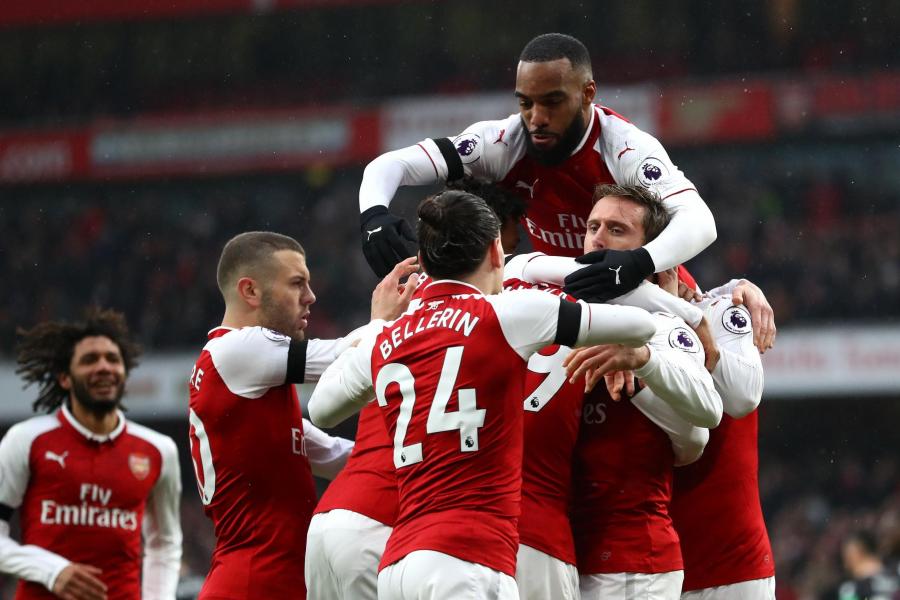 Arsenal beat Stoke City 3-0 in what was not a convincing performance from the Gunners.

Wenger’s men maintained lion’s share of possession throughout the game but did not offer much in the attack to trouble Stoke’s backline. Aaron Ramsey’s chipped effort midway through the first-half bounced off the crossbar and did not harm the visitors.

Xherdan Shaqiri came close at the other end as his inswinging corner hit the far post midway through the second half. Arsenal, however, lifted the tempo and started depleting the Stoke defence with swift movements in and around the box.

Pierre-Emerick Aubameyang came close for the hosts but was denied by Jack Butland, minutes before the first major incident of the game where Mesut Ozil earned a spot-kick after being brought down by Bruno Martins Indi. It looked extremely soft and it was another debatable decision from referee Craig Pawson. Aubameyang stepped up and rifled his shot into the bottom right corner to earn his side a hard-fought lead with 15 minutes remaining.

The Gabonese, meanwhile, ensured a win with a late goal to knock down the Potters and Alexandre Lacazette added further misery minutes later by converting a spot-kick to make it 3-0, thus sending Lambert’s men further close to a shocking demotion.

Peter Cech’s groin injury handed his deputy Ospina an opportunity between the sticks. Although the Colombian managed a clean sheet, he looked nervy and was caught out of position at times. Was lucky not to concede when Shaqiri’s inswinging corner hit the far post.

Was decent going forward but needs to work on his defensive discipline. Was troubled at times by Ramadan Sobhi down the right but the Egyptian’s lack of final delivery did not create much trouble for the hosts.

Took charge of the central defence in Laurent Koscielny’s injury absence. Pulled off some massive blocks and challenges to dominate the Stoke frontline and fought hard to win the duels. Struggled aerially at times but did well to handle the pressure and retain a clean sheet.

Did the basics right and delivered a towering display alongside Mustafi in a central defensive role.

Maintained his appreciable intercepting traits along with aerial dominance. Made timely runs high up the pitch and helped his attackers to create more opportunities inside the box.

Was rusty at times while tackling but the Egyptian delivered a commendable display in central midfield. He helped the Gunners maintain the shape in the middle of the park and also won back possession with his tireless runs before being replaced by Granit Xhaka in the second-half.

His chipped effort hit the crossbar in the first-half which did not trouble the visitors but his swift movements were more effective as the Welshman kept on combining with the attackers with his runs down the middle.

The German sensation had an impressive outing, particularly in the second half as he earned his side a spot-kick.

The Englishman has made his way back to the Arsenal starting XI and did a fair job in an advanced midfield role. He kept on switching the game using the width of the pitch, helped his backline when required and also played some smart one-twos with Ozil and Aubameyang up front. Looked a bit quiet towards the end and was replaced by Henrikh Mkhitaryan.

The Englishman had another afternoon of disappointment as he was handed a start in a wide attacking role. He failed to leave little impact before being replaced by Alexandre Lacazette around the hour mark.

Aubameyang is settling in well and scored a brace against the Potters to ensure a victory. He first converted from the spot and later doubled the lead with minutes remaining. A quality display from the Gabonese hitman.

Came on as Welbeck’s replacement and won the Gunners another spot-kick in the closing minutes. He stepped up and converted to make it 3-0.

Came in place of Elneny. Did well to keep hold of the lead.

The Armenian provided more attacking flair after replacing Wilshere and opened up the Stoke City defence more often, with his passes and movement.