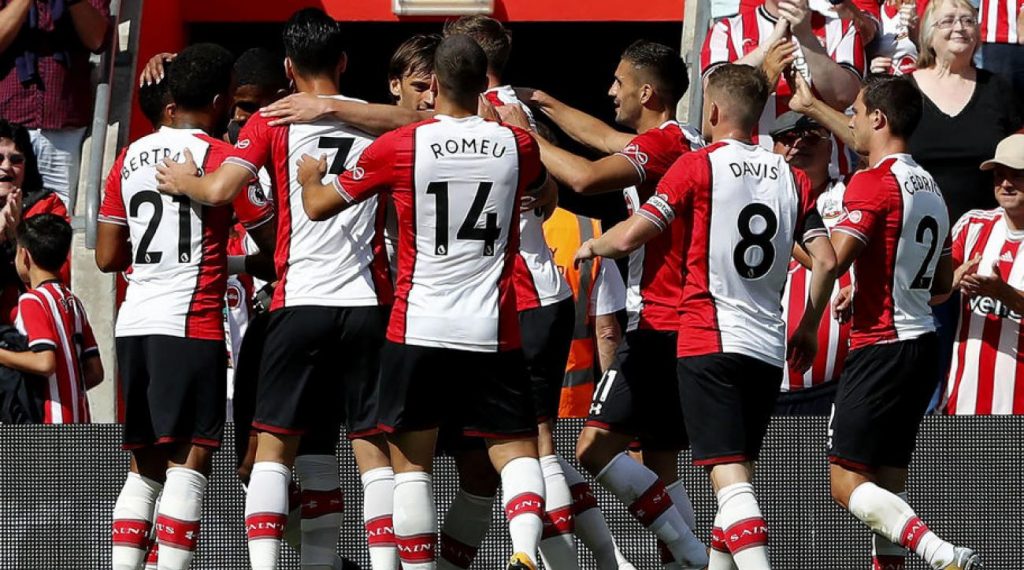 Predicted Southampton Line-up To Face Everton In The Premier League

Southampton improved their chances of survival last weekend when they beat Bournemouth 2-1 at St. Mary’s stadium.

The win was just Southampton’s sixth this season which left them a point behind 17th-placed Swansea City. Mark Hughes will be desperate to garner maximum points from the final three matches – against Everton, Swansea and Manchester City, to retain their Premier League status.

However, Hughes will be focused on the next game, which is at Everton and will be determined to build on from the win over Bournemouth.

McCarthy was the second-choice to Fraser Forster but due to the latter’s error-strewn displays, the former has become the No.1 in goal under Hughes.

Bednarek made his debut against Chelsea last month and since then has been good for the Saints.

Yoshida has blown and hot cold this season, which has affected Southampton’s form. The Japanese international needs to be at his best to stop the Everton attackers on Saturday.

Hoedt has replaced Virgil van Dijk in central defence following his departure to Liverpool. The Dutchman has been error-prone in the last few games but needs to step up and show his real quality to keep hold of the team’s top-flight status.

A consistent and reliable presence on the right-hand side of the defence, Soares remains the first choice for the manager and should keep his place in the team.

One of the most consistent left-backs in the league, Bertrand will have a task cut out to keep the in-form Theo Walcott quiet for the Saints to take anything positive from the game.

Romeu has redefined himself since joining Southampton from Chelsea. However, his performances have seen a dip this season but there is no doubting the combative approach he brings to the table.

The Gabonese struggled initially to cope with the demands of the Premier League but now looks to have settled completely. His energy and strength coupled with playmaking abilities will be vital if Southampton are to take three points against Everton.

Tadic bagged a brace last weekend as Southampton defeated Bournemouth 2-1. He will be hoping to put in a similar performance, this time at Everton.

A nippy attacker with quick-feet and top dribbling abilities, Redmond has often been criticised for not performing at the top of his potential. Despite failing to influence the game last weekend, Hughes will offer him another chance to have a go.

Austin is in sizzling form lately for the Saints and will be a constant threat to the Everton defenders. He needs to be clinical and ruthless with his finishing as Hughes aims for back-to-back wins in the Premier League.