Aberdeen will represent the biggest test for Celtic this season in the Scottish Premier League but they have been given a hope by Rangers performance against them last week, which took an 88th-minute goal by Dembele to win. The Celtic boss made a lot of changes for his midweek 4-0 victory over Ross County, but it is expected that he will revert to his strongest line-up. We look at the Celtic

so, here is how Rodgers can line his team up against the second placed Aberdeen:

Gordon has started to look a lot better in recent weeks. One of Rodgers early season concerns was that he wasn’t great with the ball at his feet but has clearly been doing some work on this and seems to be the no1 Celtic GK once again.

Was one of the players rested for Celtics midweek trip to Ross County but is the first choice Celtic fullback and will regain his place.

Has formed a good partnership with Simunovic and will retain his place as Celtic look to build on their recent clean sheets.

Has been linked with moves to other clubs across Europe but he is the number 1 Celtic defender and Rodgers will be counting on him to keep the Aberdeen attackers quiet.

The young Celtic left-back has become one of the most reliable players for the Scottish club, as displayed by him being linked to numerous other teams in Europe. He was another of the players rested midweek, and Izaguirre that replaced him didn’t do enough to cement a first team place ahead of Tierney.

The Celtic captain is arguably the most important player for the team, and he will be looking to drive his team forward and guard against any complacency creeping in.

Has formed a good partnership with Scott Brown in midfield and it is likely he will return to the team after being rested midweek. 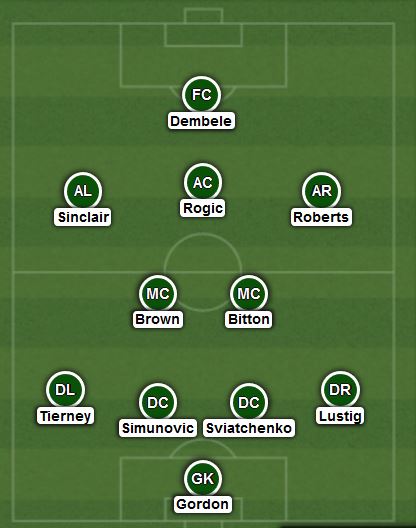 Maybe the one to benefit most from the changes that Rodgers made midweek. He gave a MOTM performance, as he scored one and assisted two more. The tricky winger is a very exciting prospect, and he will be hoping that he did enough to force his way back into Rodgers starting line-up.

Another of the players rested mid-week, but the Australian is one of Celtics best players and the side will need him in form to overcome the test that Aberdeen will provide.

Played well in midweek and got himself onto the scoresheet. It is likely he will start and is sure to cause Aberdeen problems with his tricks, pace and goalscoring ability.

He has last season’s Top goalscorer Leigh Griffiths snapping at his heels for a first team place, and there have been calls to partner the two. However, Rodgers seems to be stubborn in his decision to play two up top, and is guaranteed to include the Frenchman who come on in the 93rd minute against Ross County and still managed to score!