The Foxes rose to third place after thumping a 10-man Newcastle United 5-0 on Sunday. Brendan Rodgers will return to his old stomping ground on Saturday and he will be hoping to end Liverpool’s 100% start to the season.

James Maddison missed the game against Newcastle United with an ankle injury and remains a doubt for the trip to Anfield. Other than Maddison, Rodgers has no injury concerns ahead of the game.

Ricardo helped his team record a thumping 5-0 win over Newcastle by opening the scoring on Sunday. He’s one of the best full-backs in the league and deserves to keep his place in the team.

Evans has been fantastic so far this season, taking the responsibility of leading his troops from the back following Maguire’s departure.

He may have had a couple of shaky games at the back but Soyuncu has huge potential, and with time and experience, he’ll be a top centre-back.

One of the best attacking left-backs in the division, Chilwell will be tasked with keeping Salah quiet on Saturday.

Ndidi protects the backline by doing the dirty work in the midfield. He is one of the first names on Rodgers’ team sheet.

Ayoze Perez has not performed well over the last few games, so Rodgers could hand Albrighton a start at Anfield.

A creative player, Tielemans likes to pick up pockets of spaces and influence the game in the final third.

Praet will take some time to adapt to the Premier League but he’s a quality player who can create opportunities for his teammates out of nothing.

With Maddison a doubt, Barnes should start on the left flank. With his blistering pace and intelligent movement, he could be a real thorn for the Liverpool defenders.

Vardy is in scorching form at the moment, scoring goals left, right and centre. He is an undoubted starter at the weekend. 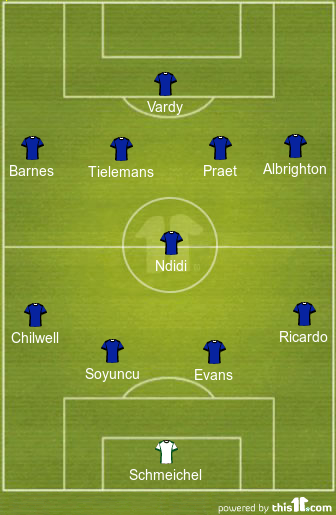