Leeds United travel to the Den to face Millwall on Saturday looking to retain the top spot in the Championship table.

Marcelo Bielsa’s side moved back to the Championship summit on Tuesday with a hard-fought 1-0 win over West Brom at Elland Road. They ended a two-game winless run to inflict a first defeat of the season on Slaven Bilic’s side.

Now Leeds turn their attention to the weekend’s game against Millwall, who haven’t won in their last five league games.

Liam Cooper and Jamie Shackleton were forced off in the Whites’ 1-0 win over West Brom and the duo is likely to miss the trip to Millwall.

Pablo Hernandez missed the West Brom game due to a muscular problem and remains a touch and go against Millwall. But Adam Forshaw could be back after missing the last three games with a hip injury.

Casilla is Leeds’ undoubted first-choice and will keep his place in the team.

Ayling returned from injury against West Brom with 15 minutes left. He did well and is expected to be handed a start at the weekend.

White has been solid at the back for Leeds and is expected to start on Saturday.

With Cooper forced off against West Brom, Berardi could be the Scotsman’s natural replacement in central defence.

Alioski scored the winner against Bilic’s side on Tuesday. He has cemented his place at left-back.

Phillips is one of the best midfielders in the Championship. A fantastic passer and a top tackler as well, he should start in his preferred deeper role.

Costa was fantastic in the 1-0 win over West Brom, terrifying the visitors’ defenders with his pace and direct running. He is likely to keep his place on the right flank.

Dallas has been fantastic for the Whites this season, impressing with his energetic displays down the right. However, he could find himself in an advanced position in the midfield against Millwall.

The Pole keeps things ticking over for his team with his tireless displays in the midfield. He’s likely to start at the Den.

Harrison put in a much-improved performance against West Brom and that could see him keep his place in the team.

Bamford produced a brilliant centre-forward display for Leeds against West Brom, impressing with his hold-up play. He will lead the Whites’ attack on Saturday as well. 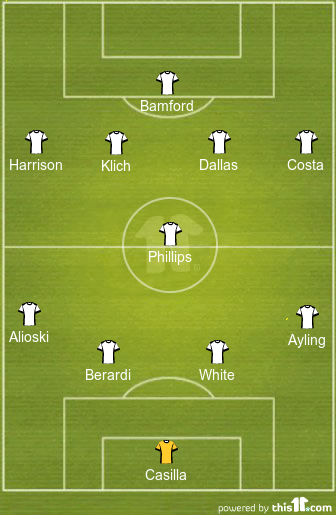