Real Madrid solidified their position at the top of the La Liga table with a win over Sporting Gijon at the Santiago Bernabeu with Cristiano Ronaldo scoring twice for the Galacticos. They are now six points clear of Barcelona who were held to a 1-1 draw by Real Sociedad at Anoeta, a stadium where they have now failed to win in over nine years.

Atletico Madrid returned to winning ways in La Liga with a 3-0 victory over Osasuna, while Celta Vigo saw off bottom side, Granada. Alaves shocked fourth-placed Villarreal as they won 2-0 at El Madrigal.

Malaga were involved in a dramatic encounter against Deportivo, which they managed to win 4-3, thanks to a stoppage time goal by Javi Ontiveros. There were wins for Sevilla who defeated Valencia and Las Palmas who came out on top against Athletic Bilbao.

Following what has been another eventful week of football, here we take a look at the La Liga Team of the week for the game week 13:

Man of the Match performance by the Alaves goalkeeper against Villarreal, as the newcomers defeated the Yellow Submarine. Made 9 saves in the game as Villarreal tried hard to get something out of the game.

Looked good going forward for Real Sociedad as he sent in several good crosses into the box. Solid defensively as he dealt with Barcelona’s threat down his flank.

Impressive showing from the Uruguayan as he scored the Rojiblancos’ first goal. A clean sheet on the night after the beating against Real last weekend.

Scored the winner for Sevilla against Valencia with 15 minutes to spare. Solid at the back.

Was very good for Alaves on the right-hand side as they held on for a clean sheet against Villarreal.

Pablo Piatti scored twice for Espanyol against Leganes. The Argentine’s double strike meant he increased his combined goals and assists tally to 12, and now sits joint top with Cristiano Ronaldo.

Powerful performance from the midfielder on the night against Malaga. Scored twice for Deportivo but could not save his team from defeat. 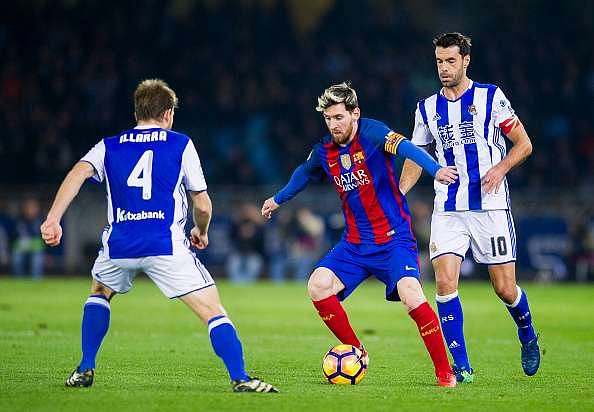 Excellent distribution throughout the game from the Spaniard as he kept it ticking for Sociedad against the current Liga champions.

Scored twice for Madrid on the night against Sporting Gijon. His early penalty followed by a headed effort from Nacho’s cross were enough for the Galacticos to see off their opponents. Current top-scorer in La Liga with 10 strikes.

The 23-year old scored twice for Malaga in a thrilling encounter at the La Rosaleda against Deportivo La Coruna which his team won 4-3.

The former Liverpool striker opened the scoring on 23 minutes for Celta against Granada. Minutes later turned provider for Theo Bongonda who made it two for Celta.