Hull City would be seeking to continue their three-game unbeaten run when they face Nottingham Forest at the KC Stadium in the Championship this Saturday. Nigel Adkins’ side played out a thrilling 3-3 draw a fortnight ago at Birmingham City, and their form has taken an upward trajectory in the last month.

They face a Nottingham team who are inconsistent after a good start to their season. The Tigers are currently 22nd in the table with 16 points from 17 games, just one goal difference away from safety. Forest, on the other hand, are seventh in the standings, a point away from the playoff spots.

Nouha Dicko is out with a hamstring injury and the Saturday game may come too soon. Stephen Kingsley could be back in action by the end of this month, while Jon Toral, Angus MacDonald, Evandro and James Weir are long-term absentees.

He has been one of Hull City’s best players this season, bailing them out on more than a few occasions.

The ex-West Ham man looks a good prospect while operating at right-back. He should continue playing in that position.

Barring the previous game, Elphick has been unerring for the Tigers ever since he arrived on loan from Aston Villa.

de Wijs wasn’t at his best against Birmingham and it was evident. He needs to sort himself out against a good Forest team.

The Versatile American would continue to feature at left-back as Kingsley is yet to recover from his injury.

Bowen has been Hull’s best attacking threat this season on a consistent basis. He should start every league game.

The captain needs to be a leader and guide his team in certain situations. He couldn’t control the midfield against Birmingham but he needs to do that against Nottingham.

Batty’s presence in front of the back-line is helping the team in a big way. Expect him to start on Saturday.

Irvine’s performance level has been up and down this season. Adkins would be seeking consistency from his midfielder.

Ever since the Pole was handed a regular role, he has made a huge impact in the final third for the Tigers. He is slowly becoming an irreplaceable element in the team.

Scored a brace against Birmingham and looked a real threat all game long. He is way better than Chris Martin on current form. 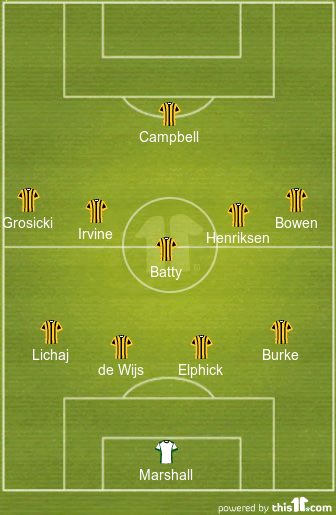