After beating title hopefuls Tottenham at the weekend, an in-form Burnley visit St.James’ Park to play Newcastle United on Tuesday night. Sean Dyche’s men are the only side, along with Manchester United, who haven’t lost a league game since the Boxing day.

As a result, the Clarets are now six points away from the danger zone and probably eight points away from being completely safe. They are up against a Newcastle side who were impressive in their win against Huddersfield.

The Magpies’ form at home has been stellar in the past month or so, hence, it won’t be easy for Burnley to go there and get a result.

All the three injured players have been out for some time – Steven Defour, Aaron Lennon and Jonathan Walters. Expect the trio to be out for a while.

Since coming back into the team, he has been a rock in goal. He should start every league game.

The experience of Bardsley could be key at right-back in an away game against fellow league team of the same parish.

He was fantastic against Spurs and should start alongside Ben Mee in central defence.

The captain continues to do well at the back for the Clarets. He is a leader who gives everything on the pitch. No doubt he will start this game.

Another player who was immense against Spurs and is expected to keep his place for the Newcastle game.

Came on as a sub and assisted the winning goal on Saturday. With Jeff Hendrick having put a lot of work in that game, we could see Dyche rotating and starting the former on Tuesday.

He has been a solid presence in the midfield and covers a lot of ground to protect the back-line and also support the front players. He is expected to start on Tuesday.

Just like Westwood, Cork has been immense for the Clarets in the midfield. He should continue his partnership with the former.

The youngster continues to impress and he should continue to start games as he has that unpredictability in his game to bamboozle the defenders.

Scored the winner against Spurs and worked ever so hard. He and Chris Wood up front are a threat to any team in the league.

The New Zealander scored the opener on Saturday and worked well with Barnes. Newcastle defenders would be wary of his aerial prowess. 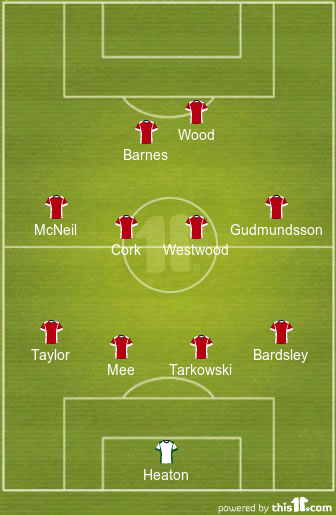