Burnley will look to make it two wins from two for the new Premier League season as they head to north London to face Arsenal on Saturday.

The Clarets may have finished 15th last season after a really poor campaign, but they thrashed Southampton 3-0 in their opening game and will be full of confidence for their trip to the Emirates.

Arsenal, meanwhile, head into their first home fixture of the campaign following a 1-0 victory over Newcastle United at St James’ Park.

Robbie Brady is a touch and go for the upcoming game, but Steven Defour is expected to miss with a calf injury. Charlie Taylor lacks match fitness and that could see him miss out again.

With Heaton gone, Dyche started Pope against Southampton and he kept a clean sheet. Expect the English goalkeeper to keep his place in the team.

Lowton is Burnley’s first choice at right-back and he should retain his place in the team.

Tarkowski has established himself as one of the Premier League’s most reliable defenders in recent seasons. He will continue in central defence.

Has looked defensively stable against Southampton and should continue to partner Tarkowski at the back.

Pieters made a telling impact on his Burnley debut with two assists. He’ll be raring to make a mark against the Gunners as well.

The Iceland international scored the Clarets’ third goal in the 3-0 win over Southampton. He is the main source of supply for Dyche’s men and should continue down the right flank.

Westwood did well in the last game, controlling the flow with his passing ability. He will keep his place in central midfield.

Cork works really hard in midfield to help Burnley tick over. He is expected to partner Westwood again in the middle of the park.

McNeil enjoyed his breakthrough last season, impressing with his direct play, flair and crossing ability. He is a certain starter on the left flank against Arsenal.

Wood has struck a fantastic partnership with Barnes up front. The towering Kiwi could prove to be a real handful for the Arsenal defenders.

Barnes scored a brace against Southampton and will look to cause all kinds of problems for Unai Emery’s side on Saturday. 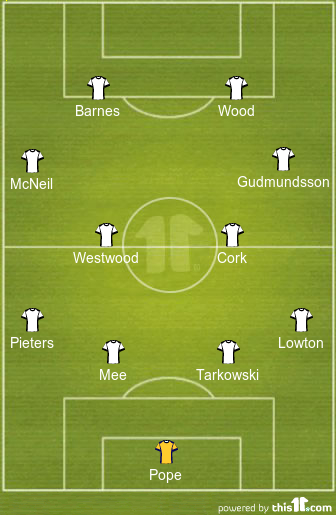