After a disappointing performance on Sunday, Rangers will hope to return to winning ways when they face Porto in matchday three of the Europa League group-stage.

The Gers are in a group where every team has three points from their respective two games played. So, if they manage to sneak out a win or at least get a draw at the Dragao, then that would keep them in good stead ahead of the last three matchdays.

However, to get anything against the Portuguese side, especially away in Portugal, Steven Gerrard’s men have to be at their very best.

Jordan Jones is a doubt for this game, while Jon Flanagan is going to miss few more weeks after getting an operation done on his hernia. Ryan Kent should start this game.

McGregor is Rangers’ first-choice keeper. He remains to be that for the next game and beyond.

The captain has had a rough time in the past few weeks. He has been making mistakes that is directly leading to opposition scoring goals. However, Gerrard may still trust with him at right-back in this game.

Goldson is probably one of the first names on the team sheet. He is certain to start on Thursday.

The summer signing has done well in the last few weeks. He has certainly replaced Nikola Katic in the team for a while.

The left-back has been starting games on a regular basis now. He is certain to do the same against Porto.

The experience of Davis would be handy in a potentially tough game away at the Dragao. He needs to be at his best though.

If Rangers are to control things in midfield, Jack needs to have one of his dynamic games. He will be given a chance to do that.

The summer signing should get an opportunity to work up and down the pitch and link things together for the team.

The on-loan winger is one of the regular members of the team and he should start on Thursday as well.

Arfield is expected to start on the left wing, with an ability to join in midfield when required.

The Colombia international is the first-choice striker in the team. He is certain to lead the line on Thursday. 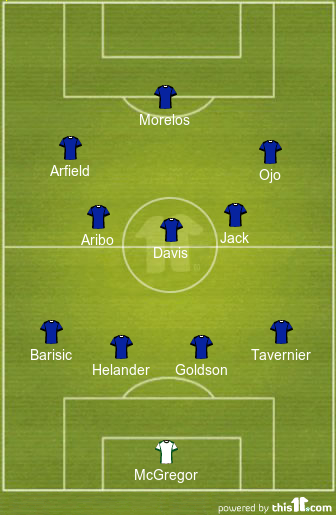