Rangers take on bitter rivals Celtic at Hampden Park on Sunday as the pair battle it out for the Scottish League Cup.

The Gers failed to convert dominance into points as Aberdeen came from two goals down to snatch a 2-2 draw at Pittodrie on Wednesday. However, they won’t have much time to dwell on this result due to the League Cup final happening on Sunday.

Steven Gerrard is aiming for his first cup as a manager and the club’s first major tournament win since they last won the trophy in 2011.

Borna Barisic is a doubt for Sunday and was left out of the squad against Aberdeen on Wednesday. Meanwhile, Jordan Jones has suffered another setback on his comeback from injury and may miss a couple of games.

McGregor is Rangers’ undisputed No.1 and should start the League Cup final at the weekend.

Tavernier will have to be at the top of his game and marshal his troops well.

Goldson was poor in the 2-2 draw with Aberdeen on Wednesday. He’ll be raring to improve and put in a strong show against Celtic.

Just like Goldson, Helander failed to impress against Aberdeen. The Swede will have to be at the top of his game on Sunday to keep the Celtic forwards at bay.

Flanagan deputised in the absence of Barisic on Wednesday and was poor. However, he’ll have a tougher job on his hands at Hampden Park in the League Cup final.

Davis is an experienced player and Rangers will expect a massive performance from the Northern Irishman.

Kamara was an unused substitute in the 2-2 draw with Aberdeen but he could be handed a start in the League Cup final.

Aribo has been a consistent performer since signing for Rangers this past summer and could get the nod ahead of Jack despite him scoring against Aberdeen.

Arfield is an experienced player who’ll look to make a difference against Neil Lennon’s side at the Hampden Park.

Kent is a livewire in the final third and could cause problems for the Celtic defenders at the weekend.

Morelos is in red-hot form for the Gers and is a certainty to start in the massive game at the Hampden Park. 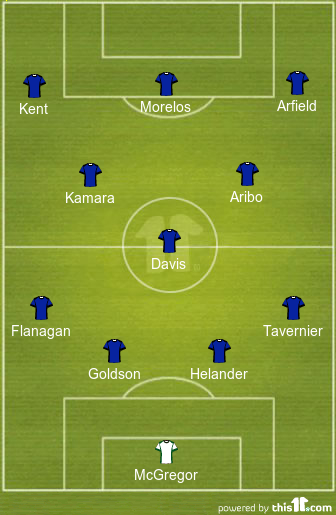