West Brom welcome Swansea City to the Hawthorns on Sunday, looking to continue their excellent winning run in the Championship.

The Baggies picked up a fifth successive win at Preston North End, thanks to a late penalty from Charlie Austin. They returned to the top of the Championship table and extended their winning run to five matches with a hard-fought 1-0 victory at Preston.

Swansea City, meanwhile, have won just once in their last five games and will be aiming to provide a stiff challenge to the table-toppers.

West Brom have no fresh injury concerns ahead of the Swansea game.

Johnstone recorded a fifth clean sheet in five Championship matches away from home on Monday. He is in good form and should keep his place in goal.

Ferguson has been a standout performer at the Hawthorns in what has been his breakthrough campaign so far. He should start on Sunday.

Ajayi has done well in central defence and is a certainty to start against Swansea.

Bartley has been excellent throughout the season, marshalling the backline with aplomb. He’s an undoubted starter.

The experienced Gibbs will look to keep things simple at the back.

A mainstay in West Brom’s starting XI, Sawyers has forged a fantastic partnership with Jake Livermore in the heart of the club’s midfield.

Livermore brings stability to the midfield and protection to the backline. He should start against the Swans.

Phillips has been in good form this season and can cause problems to the Swansea defenders.

Pereira has been one of the standout players for West Brom so far this season. The Brazilian will start in his preferred No.10 role.

Diangana has been outstanding for West Brom, adding a lot of creativity and flair to their attack.

Robson-Kanu has done very well recently. He has been scoring goals and also holding the ball up, which has helped in terms of West Brom’s link-up play. He’ll get the nod ahead of Austin in the No.9 role. 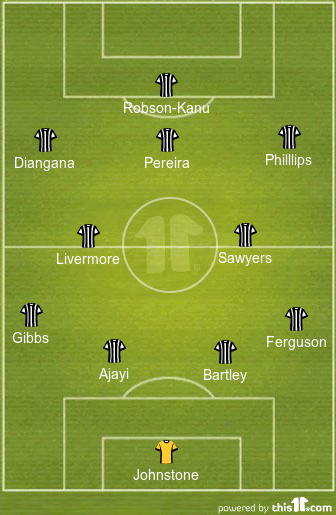