Rangers travel to Pittodrie Stadium to face Aberdeen on Wednesday, hoping to continue their winning run in the Scottish Premiership.

Steven Gerrard’s men cruised to victory against Hearts on Sunday, scoring five goals at the Ibrox. Sunday’s win over Hearts means the Gers are tied with arch-rivals Celtic on 37 points, only to be separated by an inferior goal difference of one.

Aberdeen, meanwhile, won Saturday’s contest against St. Mirren and will be looking to spoil Rangers’ party in midweek.

Jermain Defoe came on as a substitute against Hearts after missing the 2-2 Europa League draw with Feyenoord. Jordan Jones is very much on the comeback trail and it is only a matter of him regaining match fitness.

McGregor is Rangers’ undisputed No.1 and should start on Wednesday.

Tavernier will have to be at the top of his game to keep the Aberdeen forwards at bay.

Goldson is probably one of the first names on the team sheet. He is certain to start at Aberdeen.

The Swede helped Rangers keep a clean sheet against Hearts on Sunday. He’ll be aiming to keep things tight at the back on Wednesday as well.

Gerrard will have one eye on the weekend’s Scottish Cup final and could ring the changes in midfield. That could see Jack replace Davis in a deeper role.

Stewart’s brace after coming on as a substitute against Hearts could see him being rewarded with a start on Wednesday.

Aribo adds a lot of energy and intensity to Rangers’ engine room. He’ll retain his place in the team.

Arfield is an experienced player who’ll look to make a difference at the Pittodrie Stadium.

With his burst of pace, dribbling skills and directness, Kent could be a thorn for the Aberdeen defenders.

Gerrard could also freshen up his attack and give veteran Defoe the nod ahead of the red-hot Morelos in the No.9 role. 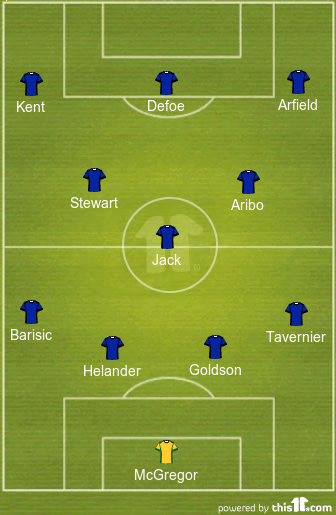