Defending champions Manchester City will be aiming to keep their winning ways going and continue to put pressure on direct rivals Liverpool when they face Crystal Palace at the Etihad this Saturday. Pep Guardiola’s men are currently second and will wait for the Merseysiders to play on Friday to see whether they can regain top spot before Christmas.

They are up against a Palace side who have struggled this season. Roy Hodgson’s men are currently 15th in the table and it seems like the relegation fight is on from this month. The Eagles are not expected to get anything from this game, hence, the pressure will be less and if they nick something by chance, it will be a bonus.

Benjamin Mendy is out until the end of February, while David Silva should be back in two weeks. Danilo and Vincent Kompany are out and there is no return date fixed. Claudio Bravo is a long-term absentee.

The Brazilian was given a rest for the midweek cup tie. He should be back for this game.

Surprisingly, Walker started the cup game and with Danilo out, we may see him in action again.

The Englishman played in central midfield on Tuesday but should be back in central defence on Saturday.

He got a game off against Leicester, hence, the Frenchman should be fit to start again.

Oleksandr Zinchenko started at left-back against the Foxes. Expect Delph to slot in there this weekend.

The Brazilian deserved the rest and got that on Tuesday. He should slot straight back in for the league game.

The German could start ahead of Kevin de Bruyne, who is still regaining his full fitness after playing on Tuesday.

The Portuguese should start after getting a rest in the midweek.

The German got a game off against Leicester and should be back to wreak havoc against the Eagles.

Good news for the Cityzens as Aguero is back fit and played on Tuesday. He would be eager to get back on the scoring sheet on Saturday.

Read More: One Brazilian for another, this Serie A midfield engine would be a perfect replacement for Fernandinho

He came off the bench against Leicester and should be fresh to start on Saturday. 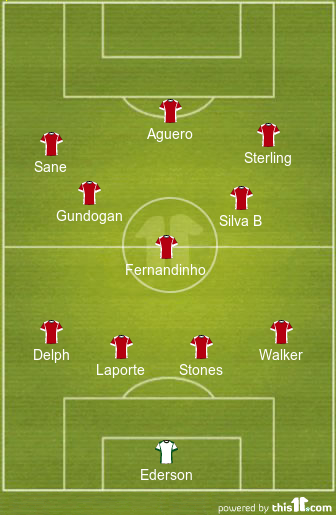