Defending champions Manchester City will hope to continue their swift defence of the title when they face Chelsea at Stamford Bridge this weekend.

The Cityzens were pushed a bit in the end against Watford, in their 2-1 win on Tuesday. Pep Guardiola’s men have won 13 out of 15 league games played, drawing the other two, which speaks volumes about their dominance.

They are up against a Chelsea who were given a progress check by Tottenham a few days back, but recovered by beating Fulham. It is going to be a belter at the Bridge and expect footballing entertainment of the highest order.

Kevin de Bruyne is nearing a return to full training and is a while away from action on the pitch. Benjamin Mendy is out for this year.

Sergio Aguero remains doubtful for the Saturday game. Vincent Kompany suffered a cramp playing against Watford and should get fit if needed this weekend.

The Brazilian’s saves and distribution are fantastic. He keeps improving with every passing game, which is a frightening prospect for the opposition.

His defensive propensities will be put to test when Eden Hazard runs at him throughout the game.

He has been a dominating centre-back this season and has certainly earned his place in the team.

He is the best centre-back City have and fair to say, the Frenchman is challenging to become the best in the league.

With Mendy out injured, we could see Delph at left-back.

The Brazilian’s control in the midfield is phenomenal in certain games. He will be tested against a Chelsea side who possess a strong midfield.

The Spaniard has single-handedly run a few games this season. If the Blues do not close him down, then trouble will be spelled out.

The combative presence of Gundogan in the midfield would be helpful to the team. He can make those late runs in the box to trouble the Chelsea defence.

He was rested for the midweek game against Watford, quite possibly for him to be fresh for this one.

Aguero is an injury doubt, hence, we may continue to see Jesus leading the line.

Read More: Who is this £4.5m French prodigy on Tottenham and Man City’s radar? The next big Ligue 1 talent?

The German is in fantastic form at the moment and is probably back to his best. Cesar Azpilicueta will have his work cut out. 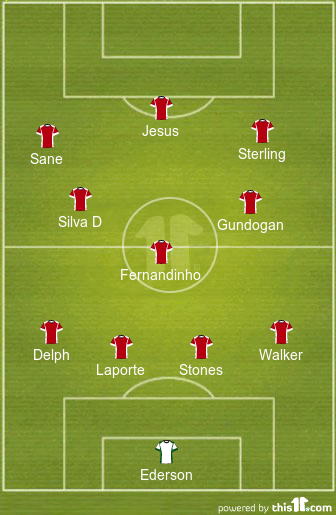