Tottenham Hotspur 3-1 Southampton: Spurs climb to third in the table

Tottenham returned to winning ways on Wednesday night after beating Southampton 3-1 at the Wembley Stadium.

Harry Kane, Lucas Moura and Son Heung-min grabbed the goals as Tottenham bounced back from their north London derby disappointment with an easy victory over Southampton.

The Saints though, were the better side in the last 30 minutes and got a late consolation through Charlie Austin.

But Spurs’ victory was never in doubt, following an early Harry Kane strike after Matt Targett had produced some sloppy defending. As the hosts played a short corner, Targett was caught napping as he never matched Kane’s run to the near post. The English striker netted from Christian Eriksen’s cross from close range for his ninth league goal of the season, giving Tottenham Hotspur the deserved lead.

After going behind early on, Southampton responded well with the next best chance of the half falling to Pierre-Emile Hojbjerg, who tested Hugo Lloris from long. 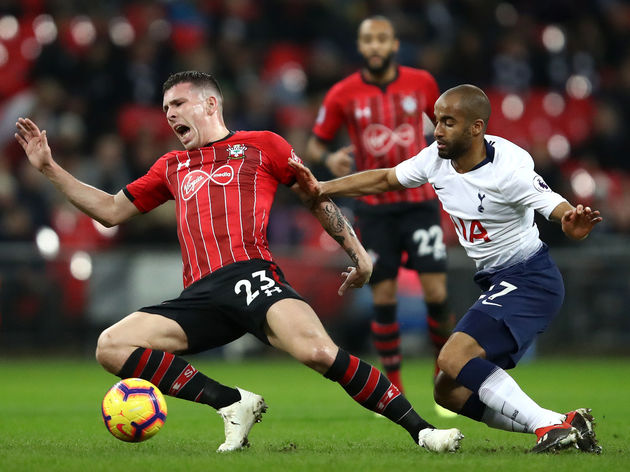 However, Mauricio Pochettino’s Tottenham Hotspur came all guns blazing after the break and doubled the lead, again from a corner. Southampton goalkeeper Alex McCarthy denied Toby Alderweireld’s flick from a corner before diving to push away Eriksen’s free-kick. But from the resulting corner, the ball fell to Lucas, whose first attempt was blocked but the rebound bounced back for him to hit it beyond McCarthy.

And it was quickly 3-0 for Spurs four minutes later after Kieran Trippier chased down Matt Targett before blocking his clearance. The ball kindly fell to Kane, who crossed it into the box for Son Heung-Min to score only his second league goal of the season.

Mauricio Pochettino’s side never looked like they needed to reach the top gear to see out the win, despite conceding a late consolation from Charlie Austin. Southampton created a lot of chances in the last half an hour but failed to convert them as Spurs held on to secure three vital points.

Read more: Tottenham re-igniting their interest in this 6ft 3in giant would massively strengthen their defence

Delighted with the victory, here is how some Tottenham fans reacted on Twitter.

Solid performance. Nice to see Lucas and Son with the goals! Poch’s trust in Foyth paid off #COYS

3 is the magic number. #COYS

Well done boys! You had to dig in but we got the 3

Nice you got the three points after Sunday, but keep a clean sheet next time

Good win to bounce back, shame about the clean sheet, but 3 points are 3 points

We were still crap in most aspects of that game! Need to sort this out @SpursOfficial! Pretty hectic schedule this month, let’s not drop too many points by performances like this #COYS #THFC

Gd win!..well played boys!. Which clr they said it was 3 days ago? I’ll leave this here. #coys #hesmagicyouknow #TOTSOU

Great response from the derby defeat and back above arsenal

Strong result against a team of players giving 110% in front of their new boss. Never easy but the boys did the business. #COYS