After winning in the dying seconds against Tottenham, Liverpool will be aiming to keep their title-chase intact when they face Southampton at St.Mary’s Stadium this Friday night.

The Reds are currently placed second on the table as the Cityzens beat Cardiff City yesterday.

Furthermore, Saints under Ralph Hasenhuttl have been a different prospect and they won’t be easy opponents for Liverpool, especially at St.Mary’s. Hence, Jurgen Klopp’s men have to be at their best if they are to get the three points on Friday.

Alex Oxlade-Chamberlain will take some time before returning to full training. Joe Gomez is back in full training and would be in contention to be in the squad on Friday.

Virgil van Dijk hurt his ankle while playing against Tottenham but he is more than expected to start the next game (h/t Liverpool Echo).

The Brazilian is their first-choice keeper and starts every league game. Thus, expect him to be in goal on Friday.

The youngster recovered from his injury and played well against Tottenham. Expect him to be in the line-up against Southampton.

Even though Gomez and Dejan Lovren are back in full training, Matip has done well in the past month and deserves to keep his place in the team.

He got injured while playing against Tottenham but it has been cleared that the Dutchman will be fit to start on Friday.

The Scotland international is their first-choice left-back and is expected to start against Southampton.

He came off the bench against Tottenham and Liverpool felt his absence for the first 70 minutes of that game. Hence, it is pretty clear that Klopp should hand the Brazilian a start on Friday.

The Dutchman is one of the key players in the team and is expected to start in the midfield as usual.

Against a potentially deep-defending Southampton team, the creativity and guile of Keita in the midfield would be key for Liverpool.

The Egyptian didn’t score against Tottenham but was involved in the winning goal. He would be aiming to break his goal drought on Friday.

He scored in the previous game and would be looking to do the same against Southampton.

The Senegalese international has been in good form in the last month or so, hence, his former colleagues would be wary of him on Friday. 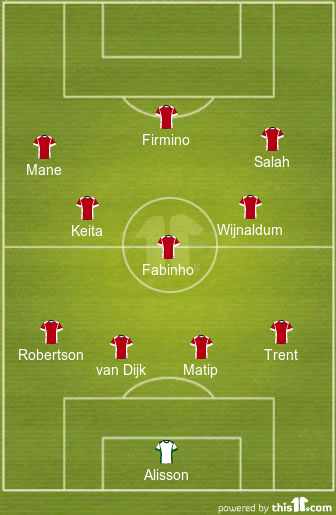