Predicted Liverpool line-up to face Napoli in the Champions League

Liverpool moved to the summit of the Premier League table after Manchester City failed to beat Chelsea in Sunday’s big clash. The Reds picked up their own win against Bournemouth with Mohamed Salah scoring a superb hat-trick as well.

But Jurgen Klopp still has a huge job on his hands when Napoli visit Merseyside in mid-week. The Reds have to win against Napoli in order to qualify to the next round and they need to win the game by a scoreline of 1-0.

If the Italians score, the Reds would have to reply with two more goals to secure a spot in the next round.

Joe Gomez is out for this game. Dejan Lovren, Adam Lallana and Nathaniel Clyne are also out injured and will be unavailable. Apart from that, Klopp has no major injury concerns in the squad.

He was once again superb against the Cherries and should keep his place between the sticks.

Well rested, Arnold could run riot against Napoli down the flanks. He has been in superb form as well.

With both Lovren and Gomez out injured, Matip must continue to partner Van Dijk at the back.

Van Dijk has been an ever-present in the squad this season and there’s no way he’ll be kept out for this game.

The left-back has been in flying form this season and will surely aim to raid down the left flank.

Wijnaldum should keep his place in the squad after an improved performance against the Cherries.

Henderson could return to the line-up and dictate play in the middle of the park.

Keita should keep his place on the left side of the central midfield. He provided a certain sense of energy against Bournemouth.

Hat-trick hero against the Cherries, he will surely keep his place and aim to do the business once again.

The Brazilian has looked much better in his last two games. He should lead the line.

Read more: Do it Klopp – Liverpool should not think twice to splash £30m on this 23-year-old speed demon

Rested against the Cherries, Mane will surely return to the line-up against Napoli. His pace would cause Napoli all sorts of problems. 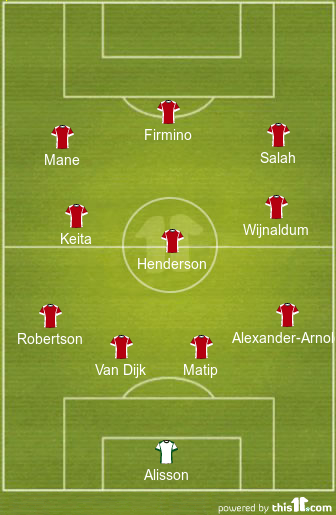