Manchester City will be aiming to return to winning ways when they face Hoffenheim in the Champions League at the Etihad. Though the Cityzens are already through to the knockout stages of this competition, the importance of getting back to winning terms after losing to Chelsea over the weekend is tangible.

Pep Guardiola might rotate his first-choice line-up as they have a big league game against Everton waiting on Saturday. In hindsight, this game doesn’t have anything for the German side because they are already knocked out of the race for the Round of 16.

Sergio Aguero, Oleksandr Zinchenko and David Silva are doubtful for this game. The latter picked up an injury at Stamford Bridge. Kevin de Bruyne is still few miles behind the race for first-team action while Benjamin Mendy is ruled out for this year.

City would ideally want to keep a clean sheet in this game, hence, we may see Ederson not being rested.

The Brazilian is expected to deputize as Kyle Walker might be rested for this match.

The experienced Argentine could also be starting if the rotation policy is taken into account. He is certainly not the first choice anymore.

The captain is expected to start and would be eager to keep a clean sheet against the German opponents.

With Mendy out and Zinchenko an injury doubt, we might see Delph playing at left-back as he has been doing in the past year or so when required.

This is the game where we might see Fernandinho being rested and hence, there is a chance for Stones to play the defensive midfield position.

The German came off the bench against Chelsea to change things, but he couldn’t. He is expected to start on Wednesday.

The youngster may get his opportunity to shine on the European stage and show his quality to the world.

He was rested for the Watford game and played against Chelsea but Leroy Sane played both matches. Hence, the former could start at left-wing to replace the latter.

He didn’t feature from the start against the Blues and City lacked the cutting edge in the final third. The Brazilian desperately needs a goal or two to raise his confidence level.

Read More: Who is this 17-year-old Benfica sensation on Man City’s radar? A big teenage talent on the rise?

With Riyad Mahrez expected to get a rest, we may see youngster Diaz starting on the right wing. 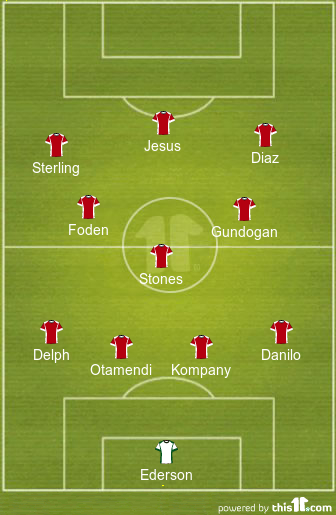