Derby County faces a trip to the DW Stadium as Frank Lampard’s men take on Wigan Athletic in the Championship on Saturday.

After a 2-1 win over Swansea City on Saturday, the Rams will be aiming to secure back-to-back league wins and maintain their playoff push.

Derby County will go into this game as favourites but they cannot take Paul Cook’s Wigan lightly at the weekend.

Curtis Davies is set to miss the rest of the season after suffering an Achilles injury, while Craig Forsyth’s knee ligament injury also looks to keep him out for the remainder of the campaign.

Mason Bennett is a long-term injury and so is Marcus Olsson. George Evans is building up his fitness playing with the Under-23s.

Meanwhile, Bradley Johnson has been slapped with a four-game ban for a biting incident involving Stoke City’s Joe Allen. He will now miss the next four matches against Wigan Athletic, Nottingham Forest, Bristol City and Sheffield United.

Carson has come under a lot of criticism of late for his poor displays. However, he remains Derby’s No.1 in goal and should start at Wigan.

Bogle has been a regular fixture in the Derby team under Lampard. He will start in his usual role at right-back.

With Curtis Davies out for the season, Keogh will have to step up his game be counted in every single game for the Rams.

Tomori has forged an excellent partnership with Keogh at the back. The youngster is a certain starter for the Wigan game.

With Forsyth out for the season, Malone is the obvious choice at left-back.

An experienced head, Huddlestone brings stability and calmness to Derby’s midfield. He will start at the base of the midfield trio at the weekend.

Needs to regain his form as quickly as possible. Now back to full fitness, Mount will look to impress his manager.

Bryson will complete Derby’s midfield troika. His energy and work ethic are excellent and that makes him such a vital member of the squad.

Wilson has been in scorching form of late for the Rams. His two goals gave the Rams a victory over Swansea last weekend and the Welshman will be high in confidence to reproduce the same form against Wigan.

Lawrence is a set-piece specialist. A very good passer of the ball, he will look to guide Derby to all three points against Wigan.

After a slow start to life at Pride Park, Marriott is showing why the Rams stumped up so much money in the summer to sign him from Peterborough. 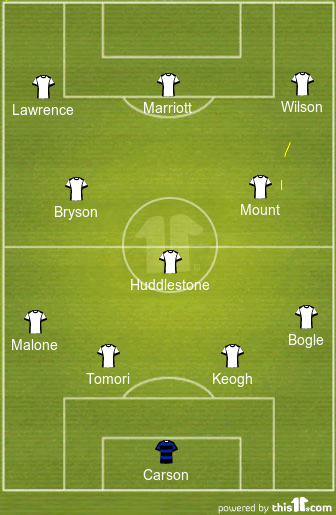