Derby County head to the Britannia Stadium to lock horns with Stoke City on Wednesday, in the Championship.

The Rams got back to winning ways in the Championship last weekend when they beat Sheffield Wednesday 2-1 at Hillsborough.

Derby County will now look to get three points against Stoke City, who have struggled following their relegation from Premier League last season.

Mason Mount and Craig Bryson returned from injuries against Sheffield Wednesday, although the latter made an appearance from the bench.

George Evans is fit as well but the Rams have lost Craig Forsyth and Mason Bennett to long-term injuries. Marcus Olsson is also a long-term casualty.

Carson is Derby’s undisputed No.1 in goal. He is set to start against Stoke City.

Played in Derby colours after three months and put in a rusty performance against Sheffield Wednesday. Wisdom needs a run of games to get back his mojo.

Keogh needs to be at the top of his game to stop the Stoke attackers on Wednesday.

Given that Tomori had a very mediocre outing at Hillsborough last weekend, Davies could be handed a start.

Malone won’t get a better chance to nail down his place at left-back, following Forsyth’s season-ending injury. But for that, he has to start impressing the manager regularly.

Huddlestone is a fantastic passer of the ball and is the most vital cog in Derby’s engine room.

Returned from injury at Sheffield Wednesday and didn’t have a good game. Mount will look to put in a better performance against Stoke.

Holmes is slowly becoming a regular fixture in the Derby team as he adds a different dimension from the midfield.

Wilson scored a peach of a goal at Hillsborough in the 2-1 victory. He will be looking to get on the scoresheet again on Tuesday.

Jozefzoon brings a lot of pace and directness to the Derby attack. After a good game last weekend, he is a certain starter against Stoke.

He just cannot stop scoring at the moment! Marriott has been brilliant in the last couple of months and has become one of the first names on the teamsheet. 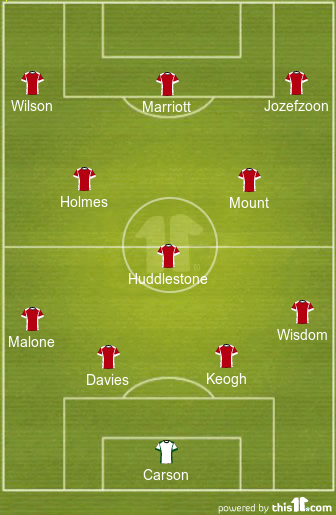