Predicted Derby County line-up to face Preston in the Championship

Derby County return to Championship action on Friday night when they take on Preston North End at Deepdale.

The Rams booked their place in the fifth round of the FA Cup with a 1-0 victory over Accrington Stanley on Saturday. Now Frank Lampard will hope to see his Derby County side get all three points at Deepdale.

But it won’t be an easy task for Lampard’s boys as Preston North End made it back-to-back wins in the league last weekend and will look to make it three on the bounce on Friday.

Jayden Bogle will serve a one-match suspension following his sending off against Accrington Stanley on Saturday.

Jack Marriott missed the win over Accrington due to illness but could come back into the squad for Derby’s trip to Deepdale. Mason Mount was forced out of action in the first half of the FA Cup game at Wham stadium and is expected to miss Friday’s game.

With Carson injured, Roos has started the last three games for Derby County in all competitions and is expected to retain his place between the sticks.

Tomori could be deployed at right-back against Preston following Bogle’s one-game suspension.

It’s an easy pick as Keogh has been a mainstay in the Derby County XI since the start of the season.

Huddlestone could be paired with Keogh in central defence on Friday.

Malone has established himself as the first-choice at left-back. He is a certain starter at Deepdale.

Evans will sit in front of the back-four, break up opposition’s attacks and control the game on Friday.

Holmes could be used in central midfield this time out following Mount’s injury at Accrington.

With 10 goals and two assists, Wilson is one of Lampard’s weapons in the attack. He definitely starts against Preston.

Two goals in the last three games must have given Waghorn a lot of confidence. His good form of late makes him an easy pick for the upcoming fixture.

Back from injury, Jozefzoon will look to make a case for himself on Friday as Derby eye all three points.

Read more: Derby signing this talented 27-year-old Celtic star on loan would be a win-win for all parties involved

Nugent did well in the FA Cup win over Accrington and should get the nod ahead of Marriott. 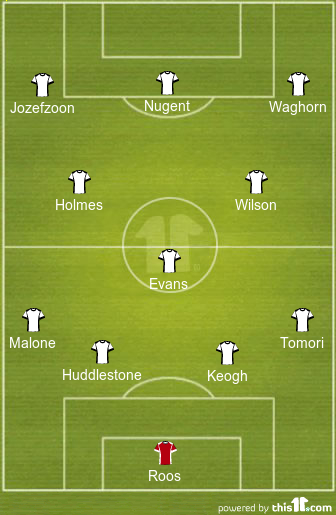