The first East Midlands derby of the season ended in a goalless draw on Monday night as Derby County dropped two crucial points against Nottingham Forest. Frank Lampard will now hope his team bounces back at the weekend.

Bristol City, meanwhile, head into this game on the back of a brilliant point against Norwich City.

Tom Lawrence limped off in the second half against Nottingham Forest and remains a doubt for Saturday’s game.

Bradley Johnson serves the third of his 4-game suspension, while Craig Forsyth and Curtis Davis have been ruled out for the season with injuries.

Carson is Derby’s undisputed No.1 and should start against Bristol City.

Bogle continues to impress the manager with his consistent displays at right-back. He is a certain starter on Saturday.

Keogh had a really good game against Forest. He’ll look to deliver a similar kind of performance at the weekend as well.

Tomori has been solid at the back for the Rams and is set to continue partnering Keogh.

With Forsyth ruled out for the season, the left-back spot has automatically become Malone’s.

Huddlestone brings calmness to the midfield and is the ideal player to protect Derby’s backline.

A tenacious midfielder, Bryson never hesitates to stick a foot out to halt his opponent from advancing.

Mount is the creative player who acts as a link between the midfield and the attack for Derby County. He is a certain starter against Bristol.

Wilson will look to take on the Bristol City defenders with his pace and dribbling skills. He will have to be at the top of his game to guide Derby County to a win.

Jozefzoon could be handed a start for this fixture. His directness and burst of pace would make him a tricky customer for the Bristol defenders.

Marriott has nailed down a regular place in the team under Lampard. He has scored six goals so far this season and remains hungry for more. 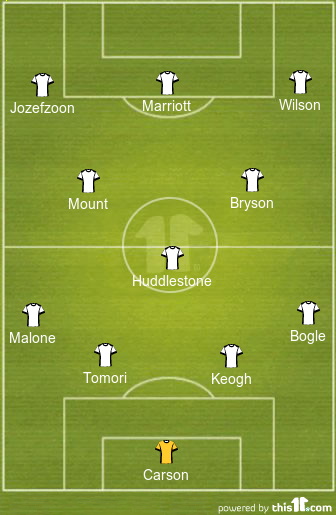