Derby County will be aiming to get back to winning ways and enhance their chances of a top-six finish when they face Aston Villa at Villa Park this Saturday. Frank Lampard’s men have won just one of their previous five league games.

As a result, they are currently seventh in the table, two points adrift of the playoff spots. They are up against a Villa side who haven’t won a league game in five. Hence, this is going to be a game between two out-of-form teams.

Craig Bryson and Andy King have been out for a few weeks now. Mason Mount and Tom Lawrence are a doubt for this game. Curtis Davies and Craig Forsyth are out for the season.

He is now the first-choice keeper in the team and should start in goal this weekend.

The right-back made a mistake that led to Derby conceding the goal against Nottingham Forest. He must improve to keep Villa at bay.

He has been a solid presence at the back for the Rams. Expect him to start this weekend.

The loanee from Chelsea should start alongside Keogh, chiefly because Curtis Davies is out for the season.

The experience and know-how of Cole would be helpful in the final games of this season as Derby target a top-six finish.

Tom Huddlestone was replaced at half-time as he struggled against Forest. Hence, Johnson is expected to start this Saturday.

With Mount and Lawrence close to being ruled out for this game, Wilson should play in central midfield.

He was one of the better players against Nottingham Forest. Expect him to keep his place in the team.

He missed a good chance to score in the last game and Derby fans would want more ruthlessness from their front players.

The striker’s movement wasn’t dovetailing with how the team played on Monday. We should expect better things from him on Saturday.

He was subbed on against Forest and did well. Lampard should give him a chance to play against a leaky Aston Villa defence. 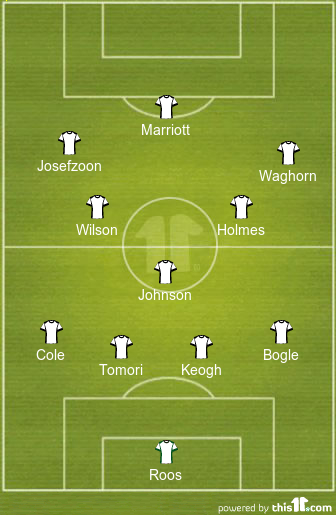