Sunday pits the two most successful clubs in English football history against each other, with Manchester United set to welcome Liverpool to Old Trafford.

Manchester United have been in resurgent form under Ole Gunnar Solskjaer – being the only unbeaten Premier League team since his appointment. Solskjaer’s team come into Sunday’s fixture after dumping Chelsea out of the FA Cup fifth round.

Liverpool, meanwhile, stand 14 points clear of United, after having recorded their best-ever start to the league midway through the campaign.

Manchester United have some good news as Jesse Lingard and Anthony Martial could be in contention to face Liverpool as their recovery has been quicker than expected.

The best in the business, De Gea will start in goal against Liverpool.

Young has led the team from the front with consistent displays on the pitch. He should at right-back.

Lindelof has nailed down a regular place in the team with a series of rock-solid performances at the back. He will retain his place in the starting XI on Sunday.

Bailly has blown hot and cold this season but the Ivorian could be trusted to partner Lindelof at the heart of the United defence.

Shaw is playing with a lot of confidence this season, making runs down the left and contributing to the team’s cause in the .

Matic has benefited a lot since Solskjaer’s appointment. The Serb is a vital cog in United’s midfield, known for his passing range and the ability to break opposition’s play.

Herrera has been so vital for the Red Devils in Solskjaer’s system, breaking up the play, playing creative passes and making intelligent runs into the box. He is an undoubted starter against Liverpool at the weekend.

Pogba has been a revelation under the Norwegian tactician, playing the best football of his career. His confidence seems to add an inch to his height, with the Frenchman raring to go against Klopp’s Reds.

The no.10 role is tailor-made for someone like Mata. He may lack the agility and pace but his vision and ability to produce killer passes in the final third remain second to none.

Lukaku will be desperate to have a go on Sunday and deliver three points to the Red Devils.

With the form that he is in, Rashford will be a very difficult customer to stop at the weekend. He’ll partner Lukaku up top as United look to spoil Liverpool’s party. 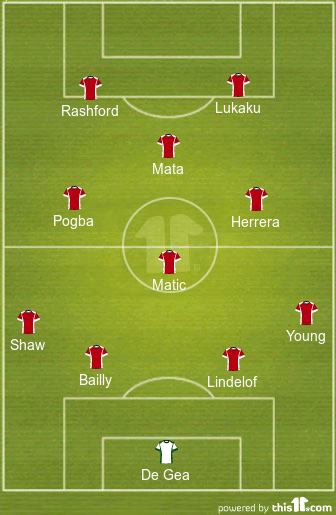