West Brom lock horns with Luton Town on Saturday in the Championship, with Slaven Bilic desperate to bounce back into winning ways.

The Baggies were eliminated from the EFL Cup by Millwall on Tuesday night. Bilic’s side did not have a good day at the office as the Lions found the winner through Aiden O’Brien, who scrambled the ball home from a corner in the 55th minute.

In contrast, Luton Town dumped Ipswich Town out of the EFL Cup by beating them 3-1 at home. So, West Brom simply cannot afford to take the Hatters lightly.

Ahmed Hegazi is the only player currently out injured for West Brom.

Johnstone is West Brom’s no.1 and should start in goal against Luton Town.

Teenage Nathan Ferguson has started the Baggies’ first two games and is expected to continue at right-back.

Strong in the air and robust in the challenge, Ajayi will continue in central defence for Bilic’s side.

Bartley is an experienced defender who will partner Ajayi at the back on Saturday.

A strong and experienced customer, Gibbs will complete the Baggies’ back four.

Livermore’s main job is to break the opposition’s play and try retaining possession for his team.

A creative player, Sawyers has the ability to pick a pass in the final third and make driving runs through the middle. He is a certain starter against Luton.

With his pace, power and direct approach, Phillips can cause all kinds of problems for Luton defenders.

Krovinovic has added creativity and a touch of flair to West Brom’s attack this season. He will start in his natural no.10 position on Saturday.

Diangana was one of the rare bright sparks in the EFL Cup defeat against Millwall. The West Ham loanee’s display in midweek could hand him a start at Luton Town.

Zohore is yet to make much of an impact at West Brom since joining from Cardiff this summer. With Charlie Austin having grabbed in goal in the EFL Cup defeat to Millwall, the big Dane needs to deliver the goods at the weekend or risk losing his place. 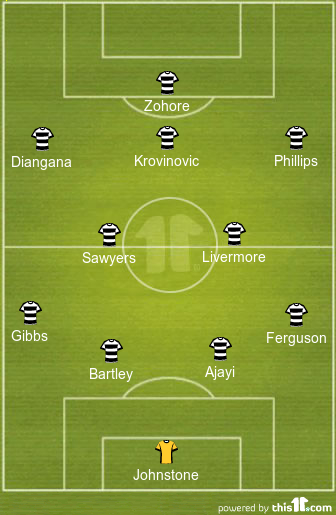