Leeds United face a trip to DW Stadium as Marcelo Bielsa aims to pick up all three points against Wigan Athletic on Saturday.

The Whites registered a 3-0 victory over Salford City on Tuesday night, earning their passage into the second round of the EFL Cup. The victory will give a lot of confidence to Bielsa’s side, who dropped two points at home against Nottingham Forest last weekend.

As far as Wigan are concerned, they were dumped out of the EFL Cup by Stoke City on Tuesday night.

Luke Ayling and Tyler Roberts are the two members currently missing from the Whites senior squad due to injury.

Casilla continues to be a shaky presence in goal, yet Bielsa is expected to go with the Spaniard.

With Ayling out injured, Dallas has started the two Championship games at right-back and is set to continue.

On loan from Brighton, Ben White is set to retain his place in central defence for Saturday’s game.

A real leader at the back, Cooper will have to be at the top of his game to keep the Wigan attackers at bay.

Douglas is expected to come back into Leeds’ starting XI at Wigan after given rest for Tuesday’s EFL Cup fixture.

The beating heart of Bielsa’s system, Phillips is an undoubted starter in the holding midfield role for Leeds.

Despite his advancing years, Hernandez remains a livewire and will look to guide the Whites to all three points at DW Stadium.

Forshaw’s energy and work ethic make him a really important figure in Bielsa’s system. He is expected to keep his place in the team on Saturday.

Klich scored in the 3-0 victory over Salford in the EFL Cup and will be raring to get himself on the score-sheet again.

Harrison’s direct running and ability to find pockets of spaces behind the defenders make him such a dangerous player. The nippy attacker will start on the left flank.

Bamford missed a host of chances in the 1-1 draw with Nottingham Forest last weekend. Yet, he could be preferred ahead of Eddie Nketiah, who scored against Salford on Tuesday. 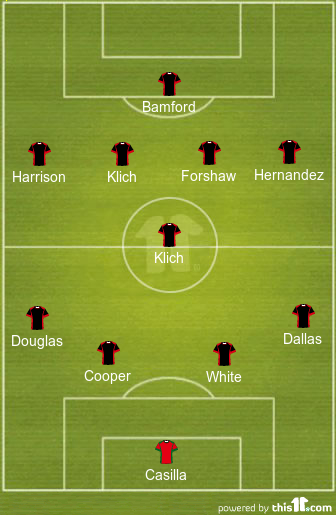