Manchester United face a trip to Southampton on Saturday as Ole Gunnar Solskjaer looks to bounce back to winning ways in the Premier League.

The Red Devils suffered a shock defeat to Crystal Palace at Old Trafford last weekend, which ended a relatively positive start to the new Premier League campaign. That has left Solskjaer’s side with just four points after the first three games.

Southampton, meanwhile, won their last league game against Brighton and come into Saturday’s game on the back of a Carabao Cup second-round success over Fulham.

Manchester United will be without Luke Shaw, who is expected to be sidelined for around a month after picking up a hamstring injury against Palace.

Anthony Martial will also be absent for the Saints encounter due to a thigh injury he picked in the final stages of last weekend’s game. Diogo Dalot is also out injured.

Meanwhile, Alexis Sanchez will join Inter Milan after the Italian club agreed on a season-long loan deal with United.

De Gea’s mistake at the near post handed Palace a shock victory last weekend. The Spaniard will be eager to redeem himself and keep Southampton away from scoring.

Wan-Bissaka has been United’s most consistent player so far this season and deserves to keep his place in the team.

Lindelof had a poor game last time out and was at fault for Palace’s opener. The Swede will need to be at his best to keep the Southampton attackers at bay.

A leader at the back, Maguire has already made an impact at the club. He is a certain starter next to Lindelof.

With Luke Shaw sidelined with a hamstring injury, Young will be his natural replacement at left-back.

Pogba is a world-class player and can change the course of a game in one blink of an eye. The Frenchman needs to step up and guide his team to all three points against Southampton.

With two goals in three games, James has enjoyed a solid start to his United career. The young Welshman will be keen to get on the score-sheet at the weekend.

Lingard has been absolutely poor this season, so Solskjaer could go for Mata in the No.10 role. The Spaniard’s creativity and vision would be required to unlock the Saints defence.

Greenwood could be handed a start on the right wing. The teenager will be keen to grab the opportunity with both hands and repay his manager’s faith.

With Martial expected to miss the trip to St. Mary’s, Rashford is likely to lead the United attack. The England international missed a penalty against Palace, so he’ll be desperate to redeem himself and help his team to all three points. 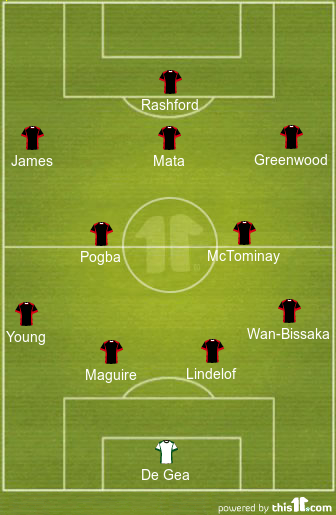