They also signed William Saliba but the teenage central defender has returned back on loan to Saint-Etienne for the 2019/20 campaign.

Newcastle, meanwhile, broke their transfer record by signing Joelinton from Hoffenheim, while the likes of Allan Saint-Maximin, Emil Krafth and Jetro Willems have also arrived at Tyneside. They will be raring to start the new campaign on a high by upsetting Unai Emery’s Arsenal.

Mesut Ozil and Sead Kolasinac have been left out of the squad for security reasons. Hector Bellerin (knee) and Konstantinos Mavropanos (groin) are likely to be sidelined until October.

New signing Kieran Tierney is unavailable due to injury, while Nicolas Pepe is short of match fitness. Emery will also be without Alexandre Lacazette, who is battling an ankle injury.

Bernd Leno will be the undisputed number one at the Emirates Stadium this season.

With Bellerin sidelined with a knee problem, Maitland-Niles should start at right-back on Sunday.

Sokratis was arguably the only defender that emerged with some credit last campaign. The tough-tackling Greek will look to start the new season on a high.

David Luiz, who sealed a move from Chelsea on transfer deadline day, will partner Sokratis in central defence against Newcastle.

With new signing Tierney out injured and Kolasinac has been left out of the squad for personal reasons, Monreal should start at left-back.

Xhaka was a regular fixture in Emery’s starting XI last season. The Switzerland international will look to control the tempo of the game from the first minute on Sunday.

Torreira enjoyed a solid debut campaign at the Emirates. He will be keen to build on and prove his worth to Emery.

Mkhitaryan will provide the creative spark to the team in the absence of Ozil. He’ll start on the right flank against the Magpies.

Willock mightily impressed in the pre-season and deserves to start the Gunners’ season opener. The young gun will look to put in a solid show at St. James’ Park.

Nelson could start on the left flank and provide Arsenal’s attack with a lot of pace and movement.

Aubameyang won the joint Golden Boot last season. He will be aiming to breach the 30-mark this term. 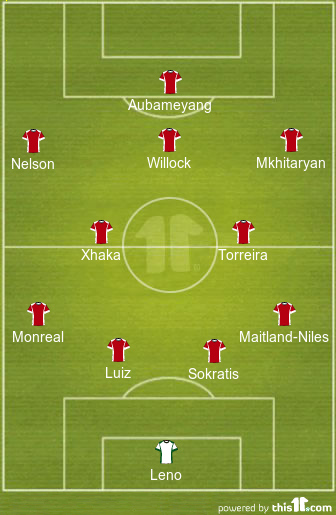