Manchester United manager Ole Gunnar Solskjaer will be hoping his players succeed in lifting spirits after a horrible end to the last campaign. The Red Devils brought made just three signings this summer in the form of Harry Maguire, Aaron Wan-Bissaka and Daniel James.

On the other hand, it will be a huge day for Frank Lampard, who is set to take charge of Chelsea for the first time in a competitive game. The Blues’ transfer embargo means no fresh faces were added in the transfer window.

Eric Bailly and Timothy Fosu-Mensah are long-term casualties for United, while Alexis Sanchez lacks match fitness. Meanwhile, Paul Pogba has recovered from the lower back injury and is fit to feature against Chelsea.

David De Gea had an underwhelming campaign last season. He’ll be raring to start the new campaign well and exert his supremacy in goal once again.

New signing Aaron Wan-Bissaka made quite an impression in the pre-season tour and will certainly start at right-back.

One of United’s bright sparks in an otherwise disappointing 2018/19 campaign, Victor Lindelof is a certain starter in Solskjaer’s starting XI against Chelsea.

Partnering Lindelof at the heart of United defence will be Harry Maguire, who joined United from Leicester City last week. The world’s most expensive defender will aim to make an immediate impact and guide his new employers to all three points on Sunday.

Luke Shaw will complete United’s back four by occupying the left-back spot.

Scott McTominay has grown leaps and bounds since the last six months or so and should start ahead of Nemanja Matic on Sunday.

Paul Pogba is fit to play and he’ll be looking to set the tempo of the game quickly. The Frenchman’s guile and ability to pick a pass in the final third make him such a vital cog in Solskjaer’s system.

Jesse Lingard is crucial to United’s pressing under Solskjaer. His speed and movement around the box should make him a difficult player to contain for the Chelsea defenders.

Juan Mata may not be the force he once was but the Spaniard’s creativity and vision to unlock tightest of defences should see him start in his favoured no.10 role.

With Lukaku’s departure, bigger things will be expected out of Marcus Rashford in United’s attack. The academy graduate will be raring to repay Solskjaer’s faith in him.

Anthony Martial has been handed back the no.9 shirt, which was vacated by Lukaku’s exit. The Frenchman is arguably United’s best finisher in front of goal and should lead the attack against Chelsea. 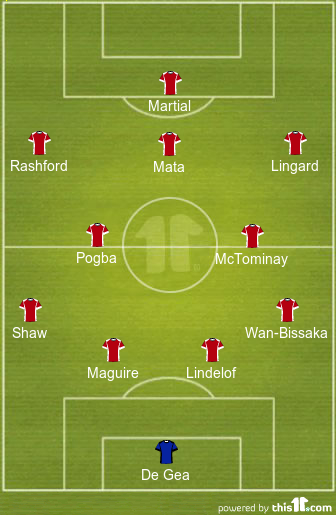