Leeds United travel to Madejski Stadium to face Reading on Tuesday, hoping to make it four wins on the bounce in the Championship.

The Whites returned to the automatic promotion places after snatching a late 2-1 win against Luton Town on Saturday. They just edged the game at Luton with a 91st-minute winner to leapfrog Preston, who fell to a 1-0 defeat away to Derby County.

Marcelo Bielsa will expect a better performance from his boys against Reading, who are 16th in the table and head into Tuesday’s contest on the back of a 1-0 defeat to Brentford.

Leeds United are likely to be without Eddie Nketiah, Adam Forshaw and Jamie Shackleton again.

The Spaniard is the club’s first-choice keeper and would be in goal for this game.

Ayling hasn’t disappointed since returning from injury and should keep his place at right-back on Tuesday.

The on-loan centre-back has made a great start to life at Elland Road. He is certain to start against Reading.

With Cooper playing the last half hour in the 2-1 victory over Luton, Bielsa could start Tuesday’s game with the Scotsman in central defence.

Dallas shrugged off his injury from the international break to play the full game against Luton. He is expected to start at left-back again.

Phillips does the dirty work in the middle of the park that keeps the Whites ticking over. He is a certainty to start against Reading.

The veteran Spaniard brings creativity and guile to the Leeds attack. He should keep his place on the right flank.

Roberts will look to influence the game against Reading as Leeds look to continue their winning run.

Klich is one of the first names on the team sheet. He is certain to start on Tuesday.

Harrison has done well in the last month or so, with the winger’s decision-making improving a lot. He’ll start on the left flank.

Bamford had a strong hand in both the Leeds goals against Luton and most of his team’s chances throughout the game at Luton. He’ll be hoping to build on this impressive performance as we head into the festive period. 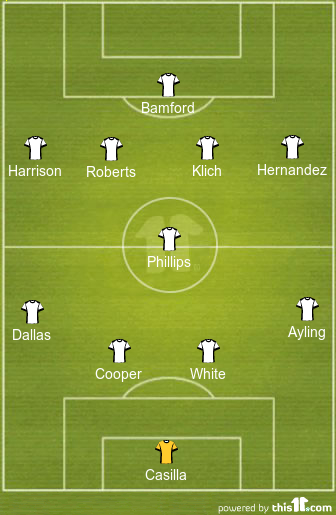