Leeds United would be aiming to come back to winning ways when they face an out-of-form Bristol City at Elland Road this Saturday. The Peacocks suffered a damaging 4-1 defeat at the hands of West Bromwich Albion before the international break, and Marcelo Bielsa’s men would be looking to inflict the same on Lee Johnson’s men.

Currently, Leeds are third in the table with 30 points, three points behind leaders Norwich City. Bristol, meanwhile are 13th in the standings with 22 points, a few paces down in the race for the Premier League promotion spots.

Jamal Blackman has returned to Chelsea after his long-term injury. Pontus Jansson is suffering from an injury and might not feature on Saturday. Luke Ayling, Gaetano Berardi and Patrick Bamford are long-term absentees.

With Blackman injured, Peacock-Farrell should continue in goal. But the latter has to improve dramatically to keep his place beyond January.

The right-back wasn’t good against the Baggies. He must improve as Ayling is still out of the team.

The skipper’s form has been up and down this season. He would need to tighten it up at the back.

With Jansson possibly out for this game, we may see youngster Shaughnessy in action.

He was one of the best players on the pitch for the Peacocks against West Brom. Expect him to start most games from now on.

The Englishman has been in great form, shielding the back-line and providing the base to the midfield.

The Pole, in general, has had a good season so far. Bielsa would be hoping for more of the same in the coming period.

Adam Forshaw got his fair share of opportunities before the international break, but he failed to impact the games from the midfield. Hence, we may see Saiz back in action.

The Spaniard has the responsibility of producing the goods from right wing. Leeds need him in good form for the rest of the season.

The Macedonian hasn’t been doing well so far and he might have to perform better to keep his place beyond January.

Leeds fans would be hoping that their striker stays in good form, scoring goals on a regular basis. 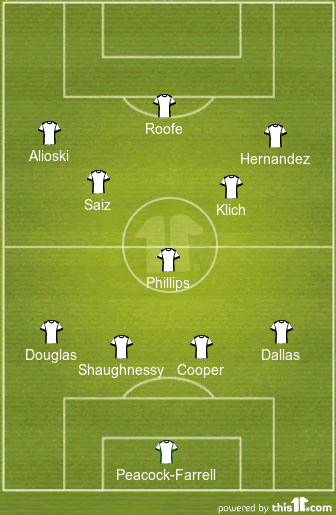