Newcastle United would be aiming to keep their three-game winning streak going when they face West Ham United at St. James’ Park this Saturday in the Premier League. The Magpies were impressive and wasteful at the same time against Burnley, but they got the job done with an important away win.

Now, Rafa Benitez’s men are up against a West Ham side who were battered by Manchester City last Saturday. Hence, they will be looking to get better this weekend and put up an improved display against the Magpies.

Yoshinori Muto is still nursing a Calf/Shin/Heel injury and is out for this game. Jamaal Lascelles is recovering but the weekend game might come too early for him. Paul Dummett is a doubt, while Florian Lejeune is a long-term absentee.

The Slovak has been one of the vital players in the team. His saves are so defining in almost every game.

The American played as a wing-back against Burnley and was productive. Hence, expect him to play in that position.

The Argentine scored a goal in a surprising turn of events. He has been a solid figure at the back, especially during the absence of Lascelles.

With the captain out, Schar has replaced him well and partnered Fernandez and Ciaran Clark well.

Clark scored against the Clarets and looked secure at the back. With Dummett expected to be out for this weekend, expect the former to start as a left centre-back.

He missed the simplest chance you could ever get as a forward player. The ex-Bournemouth man did well as a left wing-back though and should continue there.

The South Korean has instilled a breath of calm air into the Newcastle midfield with ball retention and movement of high quality.

Diame has been one of the mainstays in the team this season, proving that the manager trusts him to do the job.

The Spaniard is expected to start on the left-hand side of the attack, just like he did against Burnley.

Newcastle have done a good job to get him in the summer. The Venezuelan leads the line well and if he doesn’t score, he will hold the ball and create chances for others.

Read More: Newcastle’s defence would become a solid unit if they land this 30-year-old former PL ace in January

Kenedy’s quality has come to the fore in recent games, something a team needs in the final third. 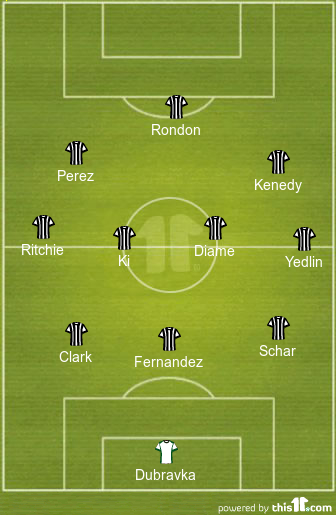