Bournemouth will travel to the Villa Park to face Aston Villa in the Premier League as Eddie Howe aims to get all three points on Saturday.

The Cherries drew 1-1 with Sheffield United in their season opener, with visitors’ skipper Billy Sharp popping up with the late equaliser at the Vitality Stadium. Chris Mepham had scored for Eddie Howe’s men.

Aston Villa, meanwhile, were beaten 3-1 at Tottenham and Dean Smith will be desperate to bounce back against Bournemouth at the weekend.

Howe has a long list of injury at the moment. The likes of Dan Gosling, David Brooks, Simon Francis and Lewis Cook are long-term injuries. New signings Lloyd Kelly and Arnaut Danjuma Groeneveld remain out with ankle problem.

Ramsdale got the nod over Artur Boruc, Asmir Begovic and Mark Travers to start against Sheffield United and he did well, making a save as early as 33 seconds on the clock. He will keep his place in goal again.

Took his goal well against Sheffield United. He’ll need to be strong at the back to stop Aston Villa from scoring.

The experienced defender is a permanent fixture in the Cherries backline. Should start at the heart of the three-man defence.

The Netherlands defender will occupy the left-hand side of the back three for the visitors at the Villa Park on Saturday.

Smith will offer width to the visitors from the right wing-back position. He’ll need to be solid defensively as the Englishman could come up against the tricky El Ghazi.

The Colombian international was a permanent fixture in Howe’s side last season. He should start in the middle of the park.

Billing enjoyed a decent debut for the Cherries last weekend. He will partner Lerma in central midfield.

The left flank will be occupied by Diego Rico, who could stretch Villa’s backline with his pace and power.

King is a powerful presence on the pitch and is likely to start on the right-hand side for the Cherries against Smith’s Villa side on Saturday.

Fraser brings creativity and flair to the Bournemouth attack, making him one of the indispensable figures for Howe.

Spearheading the attack for Eddie Howe’s side at Villa Park should be Callum Wilson, who was the club’s top goalscorer last season. 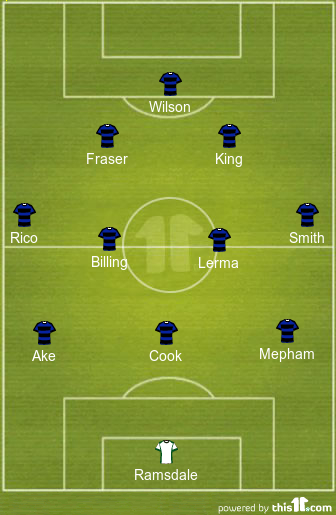