Arsenal will be aiming to keep the winning momentum going when they face West Ham United at the London Stadium this Saturday. After a horrific defeat at Liverpool, the Gunners recovered well by beating Fulham in the league and Blackpool in the FA Cup. Currently, they are just three points behind the Champions League places, and a win to start the weekend would be ideal.

However, it won’t be easy though, as the Hammers are good team under Manuel Pellegrini. The new signings are gelling well there and the manager is settling in. Hence, expect a tight and well-contested London derby.

Henrikh Mkhitaryan will return by the second week of February. Hector Bellerin, Nacho Monreal, Mesut Ozil and Shkodran Mustafi are all expected to be involved this weekend. It remains to be seen how many of them are selected. Rob Holding and Danny Welbeck are long-term absentees. Laurent Koscielny is back in training.

He hasn’t been at his best in the last few games, partly because the defenders haven’t helped him. In any case, the German is now the first-choice goalkeeper at the club.

The veteran hasn’t been good when playing as a fullback. The wide centre-back role suits him better.

The German is expected to be back in the line-up and play in central defence.

He has been a good addition to the squad this season. The Greek is a solid presence at the back.

With Bellerin a doubt, we may see Maitland-Niles continue to start at right wing-back. The youngster has been superb since his return from injury.

The Uruguayan didn’t feature from the start against Fulham and was rested for the Blackpool game. Expect him to start against the Hammers.

His presence in the midfield has been influential for the Gunners. The partnership with Torreira is flourishing well.

Monreal is still a doubt, hence, Kolasinac should keep his place at left wing-back.

The joint top-scorer in the league starts every league game, as a support man for Alexandre Lacazette.

The Nigerian played against Blackpool and with Arsenal short on options, expect him to start on Saturday as well.

The Frenchman has been doing well as the lead man for the Gunners. He should start against West Ham. 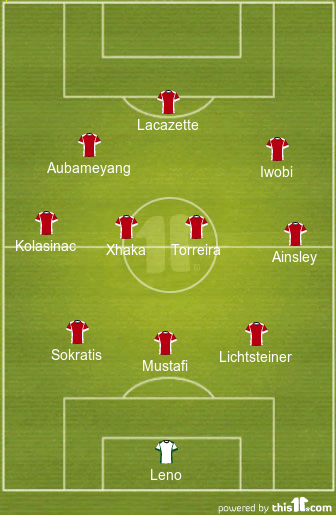