Another chapter of the Manchester United-Liverpool rivalry is upon us – this time with more zest and probably with more to lose for either team.

While the Red Devils would not want their arch-rivals to win the league and will do everything in their might to stop that from happening, the Reds would be aiming to beat their opponents on Sunday and take a giant step towards finally winning a domestic league title after 29 years.

The plots and subplots are ready as every footballing eye will be glued towards Old Trafford this weekend.

Since the last time these two teams met at Anfield in December, when Liverpool demolished United, the mood has changed at the latter. The arrival of Ole Gunnar Solskjaer has revitalised the Red Devils and they are yet to be in the league under the Norwegian.

For Jurgen Klopp’s men, things haven’t been all that smooth since the turn of the year. They are currently second in the league on goal difference, with this game in hand. However, the results are becoming hard to come by and the pressure is slowly seeping inside the players and supporters.

Before moving any further, let’s take a look at the combined line-up, featuring players of both teams who are available to contest in the game.

Even though Alisson Becker has had a good season and has kept more clean sheets than De Gea, the United keeper is still the number one in the league.

In terms of quality, Trent is better than Ashley Young, hence, the Liverpool man gets the nod.

Liverpool Joe Gomez and Dejan Lovren out for this game, hence, we will continue to see Joel Matip alongside Virgil van Dijk for this game. Compared to Matip, Lindelof has done well, especially under Solskjaer.

He is probably the best centre-back in the league and would walk into any line-up.

Luke Shaw has had a good season thus far but in terms of consistency and quality, Robertson shades the Englishman slightly.

Although Fabinho only really began to make an impact since the festive period, he is slightly better than Nemanja Matic in that holding midfield role. The United man has been found wanting in some of the big games this season.

The Frenchman is probably the most in-form player in the league since the arrival of Solskjaer. Liverpool will be wary of him.

He is probably the most consistent midfielder in the Liverpool team and continues to be an important member of Klopp’s side.

Mane has been brilliant this season for Liverpool and is in an irresistible form currently.

Since the managerial change, Rashford has got the chance to lead the line and the Englishman has been doing a fantastic job. He will be a real threat to the Liverpool defence this Sunday.

The Egyptian hasn’t had a season where he has blown everyone away last year, but he still scores goals and remains a threat to the opposition. 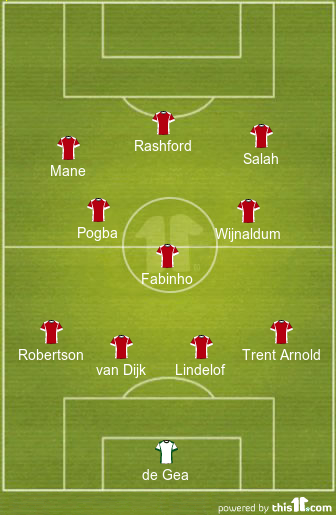