Middlesbrough would hope to keep their League Cup hopes alive when they face Premier League club Crystal Palace at the Riverside stadium. Tony Pulis’ men are third in the Championship, two points behind leaders Sheffield United.

Meanwhile, Palace got a valuable point at home to Arsenal, which lifted them to 14th in the Premier League table. The home team come into this game after an important 1-1 draw versus Derby County. Boro would be aiming to keep their three-game unbeaten run going prior to an away match against Stoke City at the weekend.

Ryan Shotton is injured and may take some more time to recover as the club anxiously wait to know the extent of his knee injury. Pulis is expected to ring the changes in the starting line-up, giving fringe players a chance to prove their worth on the pitch.

The veteran Greek played in the previous round and should start in goal ahead of regular starter Darren Randolph.

The loanee from Wolves played at right-back in the last round. Pulis can play him on the right-hand side of the central defence in this game.

The former Manchester United defender didn’t play against Derby on Saturday, hence, he may start this game.

The youngster started against Preston in the previous round. He may get another chance to show his talent.

The youngster is a versatile defender who can play as a full-back and also as a wing-back. The manager can play him at left wing-back for this game.

The young winger can be deployed at wing-back with the freedom to go forward and help the attackers.

The loanee from Southampton has played only five games in the Championship. He may have to play well in this game to impress the manager.

The 32-year-old has played more games in the League Cup than in the Championship this season. Expect him to start in central midfield against Palace.

The young midfielder can be deployed behind the strikers to take the ball in half spaces and create goal-scoring opportunities.

Gestede could start this game and provide the aerial threat which might be uncomfortable for the Palace defenders.

The youngster started and scored in the previous round against Preston. Expect him to partner Gestede. 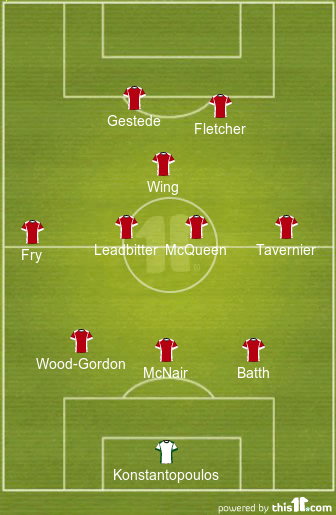