Arsenal carried on with their good form and outplayed Tottenham Hotspur 4-2 in the season’s first North London derby at the Emirates Stadium. Pierre-Emerick Aubameyang scored a brace, while Alexandre Lacazette and Lucas Torreira were on target to seal the win for the Gunners, who are now at fourth place on the table, ahead of their arch-rivals on goal difference.

It was a frenetic old encounter with a proper derby feeling to it from the start to the end. Both teams went for it on the front foot, and there was no holding back from either manager as well. Credit goes to them for making their teams play at an unbelievably high intensity.

Below we will analyse the game tactically and breakdown it down as such to see how Arsenal outplayed Tottenhan in certain parts to win the game: 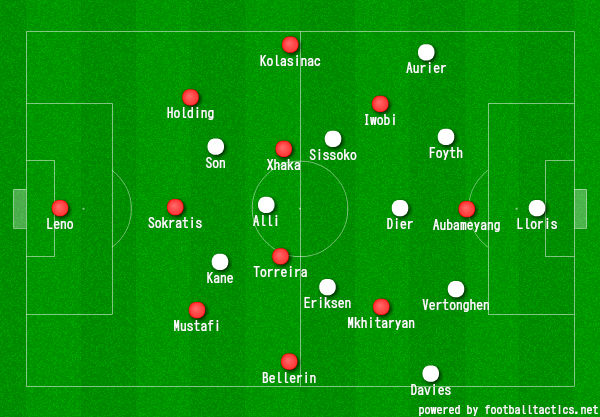 Shown in the above image is the starting line-ups of both teams with their respective shapes. Spurs, just like last week, started with a diamond midfield, with Eric Dier at the base and Dele Alli at the tip. Christian Eriksen and Moussa Sissoko started as wide midfielders while Son Heung-Min had a free role around Harry Kane up front.

Arsenal too didn’t tinker their shape, and went with the one they played against Bournemouth. The usage of three central defenders allowed Hector Bellerin and Sead Kolasinac to be ultra-attacking from the wing-back positions.

And for the opening 20-25 minutes, the Gunners used that ploy to good effect. Knowing that Tottenham are lacking width, they pressed hard in the midfield with able support from the wide forwards and got the ball to their wing-backs as quickly as they could. Even the big switch to the other side was always on the cards. 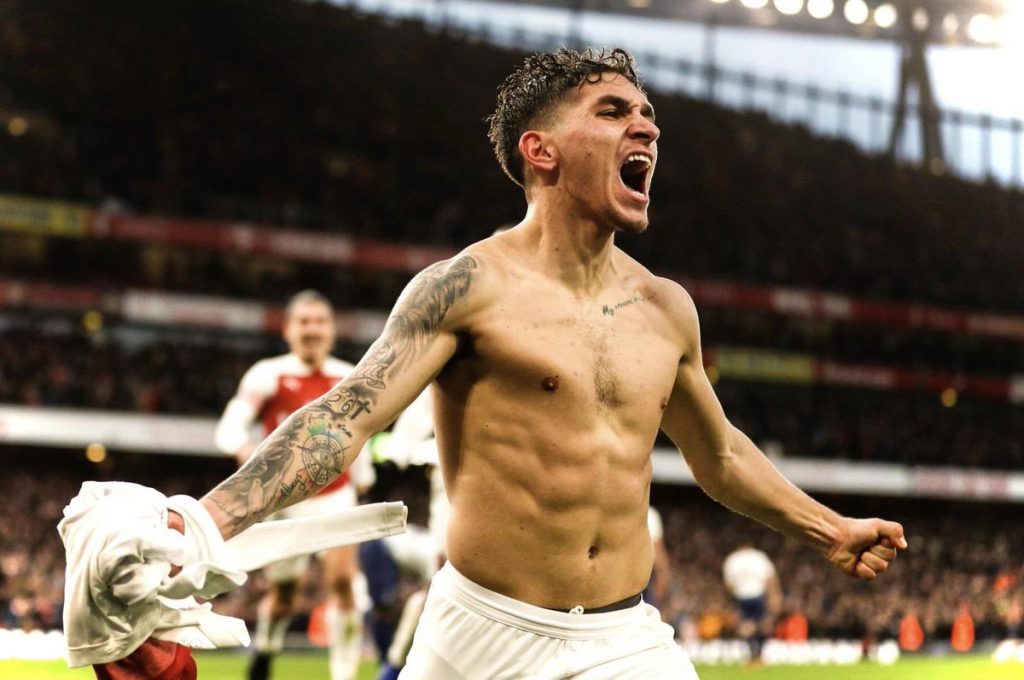 This surprised the away side as they were expecting to outnumber the home side in central areas and get their own width from full-backs. However, given the fact that the latter flew out of the blocks, the story was something different.

But after around the half-hour mark, Spurs scored two goals in four minutes to turn the game around; they started dominating. The four midfielders started to work in tandem to outplay the duo of Lucas Torreira and Granit Xhaka and both Henrikh Mkhitaryan and Alex Iwobi weren’t able help them out.

In a sense, half-time came at the right time for Emery as he must have seen that his team was starting to get overrun in the midfield in the latter stages of the first half. 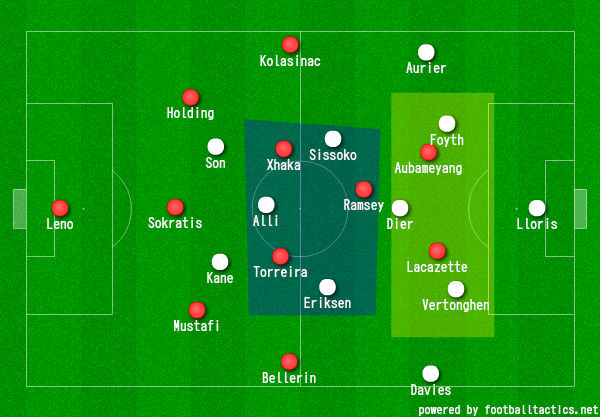 The Spaniard was hanging about at the break and made a couple of changes. He replaced Iwobi and Mkhitaryan and brought in Aaron Ramsey and Alexandre Lacazette.

This resulted in a change of shape for the Gunners, with the Welshman playing as a number 10 and the Frenchman up top alongside Aubameyang. It was now more of a 3-4-1-2, rather than a 3-4-2-1.

This allowed the home side to dominate the game again. Emery challenged his wing-backs to peg the Tottenham full-backs to their own half by sacrificing his wide attackers. In the midfield, the arrival of Ramsey meant he is another number in midfield, while Lacazette’s arrival forced Dier to be deeper than usual (as shown in the above image).

It virtually left Arsenal with 3 v 3 in the midfield (as shown in the blue rectangle). This, in turn, helped them to reassert themselves in the game. The second goal was about Ramsey making a late run on the side of Vertonghen. Bellerin picks him out, Ramsey then picked Aubameyang with a cheeky cutback, and the finish from the striker was sumptuous. It all started with the number 10 making a run on the corridor of half-space.

The third goal involved Ramsey again, as he robbed Juan Foyth off the ball and set up Lacazette, whose deflected shot went in. Another instance of extra numbers in the central area doing the trick. By that time, Emery had brought in Matteo Guendouzi to revert to a back four and play with the 4-3-1-2 system, mirroring to how Spurs started. 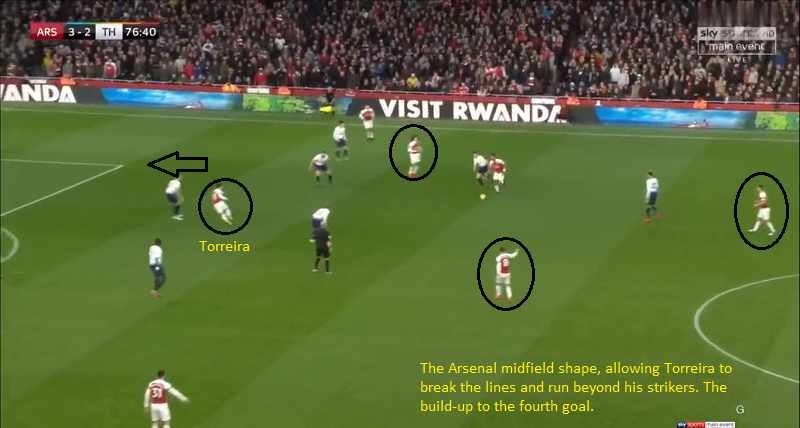 Talking about the fourth goal, Lucas Torreira’s run from deeper midfield beyond the last line of Tottenham defence signifies the freedom he had. The Uruguayan knew he now has two midfielders behind, and a number 10 protecting the space if his run goes unpicked.

As it happened, Aubameyang picked him out with a lovely slide pass, and the 22-year-old scored his first goal for the Gunners.

The change made by Emery at half-time eventually proved to be too much for Spurs, who should have had Harry Winks on for Christian Eriksen as soon as the Dane was getting overrun after the break.

However, the Arsenal boss deserves maximum credits. Making a double change at the interval in a derby game is not easy, because the repercussions in case it goes for a flop would be just too much.

Yet the Spaniard spotted a glitch in his starting system and rectified that to perfection. Not many managers have the courage to instantly fabricate the change and eventually turn the game in favour of their team. 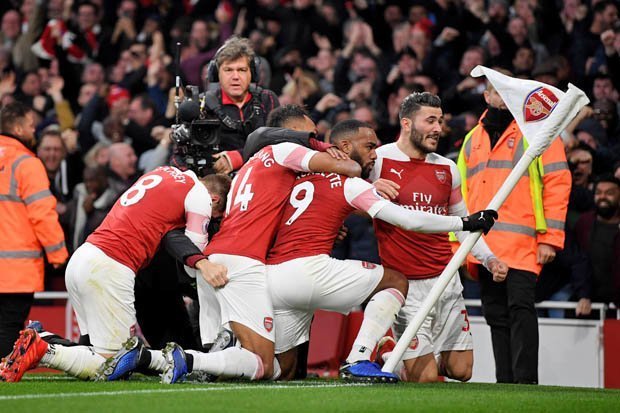 Tottenham got leggy after the break, which is why Pochettino should have been pro-active around the hour mark. The Argentine must have brought on Lucas Moura and Winks to possibly replace Dele Alli and Christian Eriksen.

That would have instilled energy into the midfield and added width to their attack, which might have forced the Arsenal wing-backs to check their forward runs.

Read More: Arsenal’s left wing problems would not exist if they sign this £100m-rated Belgian star in the summer

But it’s all gone now. The slightest misjudgment in a derby game from players/managers can prove to be fatal and that turned out to be the case for the Lilywhites. For the Gunners, pat on the back for their gaffer as he tinkered things and switched the derby into red mode.