According to reports, Arsenal have joined Manchester United and Chelsea in the race to sign Paris Saint-Germain left-back, Laywin Kurzawa.

The Frenchman started the season as Unai Emery’s first-choice left-back but the sudden rise of Yuri Berchiche has seen the 25-year-old lose his spot. Kurzawa has struggled for game time lately and with the World Cup fast approaching, he will be gutted not to have played regularly.

With just 20 games played in Ligue 1 this season, Kurzawa is reportedly on his way out of PSG, with Arsenal showing interest in signing him at the end of the season.

Arsene Wenger is set to leave Arsenal at the end of the season which clearly indicates that the man to replace the Frenchman will face an uphill task to rebuild the squad.

Whoever replaces Wenger this summer should have the pedigree to turn around the club’s fortunes after another disappointing season in the Premier League which will also see them miss Champions League football the second consecutive year. 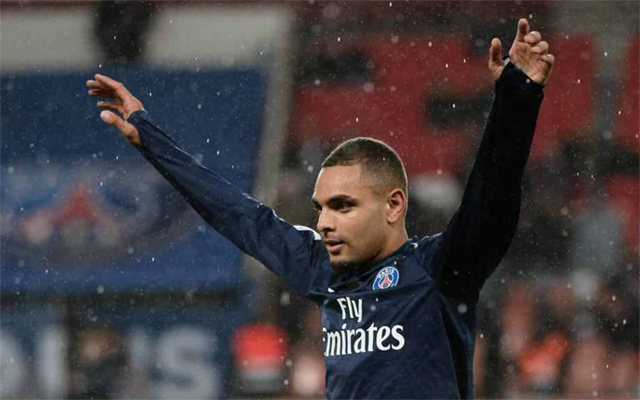 Having shipped in a record-breaking 51 goals this season, strengthening the defence should be Arsenal’s priority going into the new season. While there is a need for an overhaul in central defence, the left-back position needs some addressing too.

Nacho Monreal has established himself as the first-choice left-back at the Emirates with his fantastic displays this season. He has been reliable and an ever-present figure in Arsenal’s defence, with the Spaniard also adding a lot of goals to his name this term. Knowing that Monreal has started ageing, the Gunners signed Sead Kolasinac on a free transfer in 2016.

Kolasinac arrived at the Emirates from Schalke with a lot of fanfare but has failed to live up to the billing. He has found first-team opportunities tough to come by this season, with Monreal firmly holding the left-back spot.

With Monreal having turned 32 earlier this year and Kolasinac failing to impress this season, there is a big need to address the left-back area. That said, the North Londoners must focus on signing Kurzawa from PSG at the end of the season.

Kurzawa has competed with Berchiche for a regular starting spot at PSG this campaign and while a move to Arsenal could work well for him, he must bear in mind that he would face a similar situation at the Emirates too. However, Kurzawa has all the ingredients needed in a modern full-back and would excel at Arsenal.

The Frenchman shot his name into Champions League history by becoming the first ever left-back to score a hat-trick. At 25 years of age, he is not a hot prospect anymore. He is now a matured player, having played club football for a long period of time and also turning into a full French international now.

With his blistering pace, agility and exceptional crossing ability, Kurzawa is a real deal. He also boasts excellent creativity and eye for goals, which will make him valuable to the Gunners. Also, the France international has time and again proved to be a difference maker at PSG and would bring a lot of experience to help Arsenal have an easy transition after Wenger’s departure.

The Frenchman is only 25 years old and is one of the best in France. It hasn’t been a great season for Kurzawa but there is no doubting his ability and talent. The Gunners must go all out to sign the left-back from PSG this summer.