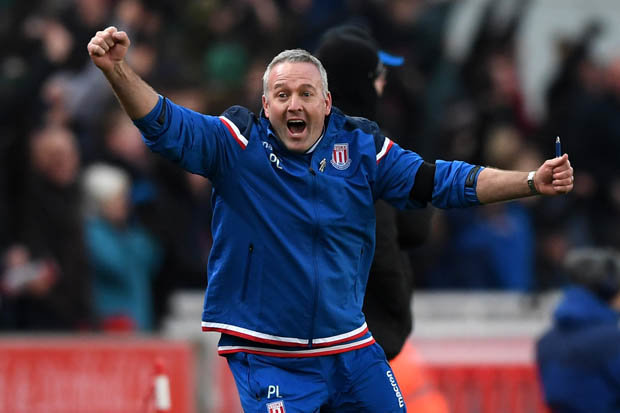 Stoke City’s 10-year stay in the top flight came to an end with a 2-1 home defeat to Crystal Palace in the penultimate game of their season, on Saturday.

Paul Lambert, who took over from Mark Hughes in January, failed to revive the Potters’ season and they became the first team to suffer relegation this campaign.

Lambert had a huge task when he replaced Hughes but he couldn’t meet his objective and while he might think himself as the ideal man to bring back the club to top-flight next year, Stoke must simply not continue with him. Here are three managers Stoke should look to replace Lambert with at the end of the season.

Nigel Pearson is one of the names that immediately comes to my mind to replace Lambert at Stoke. Pearson was the man behind Leicester City’s Championship winning team of 2013-14 that saw them get promoted to the Premier League.

However, after getting sacked by Leicester in 2015, Pearson endured a horrible time in charge of Derby County and was sacked in 2016. He is currently the manager of Belgian First Division B side Oud-Heverlee Leuven.

Pearson has a lot of experience and would prove to be a top manager to take over at Stoke.

A man with a reasonable coaching experience, Aitor Karanka is currently the head coach of Nottingham Forest. He helped Middlesbrough to promotion a couple of seasons back but failed to keep them in the Premier League and was subsequently sacked.

The Spaniard was the assistant coach under Jose Mourinho at Real Madrid between 2010-2013. Karanka did well at Middlesbrough but was often criticised for not altering his team’s style of play. However, he has been a clever tactician and having spent time with Mourinho, the Spaniard, if given time, could be a fantastic manager at Stoke.

Pardew will be desperate to revive his managerial career after being sacked by West Brom in April. A run of just one win in 19 games plotted his downfall at the Hawthorns.

Despite the very recent failure, Pardew is available, as he looks to get back to coaching. He is a manager with solid experience but his managerial methods often have a positive impact before tailing off.

A club of Stoke’s stature would appeal to Pardew as he can right the wrong in the Championship. He is still a top dog in management and Stoke must show faith in the 56-year-old, who could prove to be a hit amongst the Potters supporters.