It appears as if Dejan Lovren’s time at Liverpool must come to an end in the summer after a dismal display in the 5-2 win over AS Roma in the Champions League semi-final first leg tie.

Liverpool were cruising to a 5-0 win against Roma before they conceded two late goals. Edin Dzeko made the most of a Lovren mistake to pull one back before Diego Perotti scored from the penalty spot. Despite winning the tie 5-2, defensive mistakes were clearly visible and Lovren was culpable for Dzeko’s goal.

It has been the same old story for Lovren, who has endured a difficult start to his Anfield career after moving from Southampton in 2014. Earlier this season, the Croatian was substituted 31 minutes into Liverpool’s 4-1 defeat to Tottenham at Wembley.

Since being hooked in the first half against Spurs last season, little has changed. In fact, the £65,000-a-week defender is still vulnerable to making disastrous mistakes.

In the 2-1 defeat against Manchester United in March, Jose Mourinho undoubtedly blunted the Reds’ attack by harrowing the front three off the ball but United’s win came virtue of two simple long punts launched by goalkeeper David De Gea. 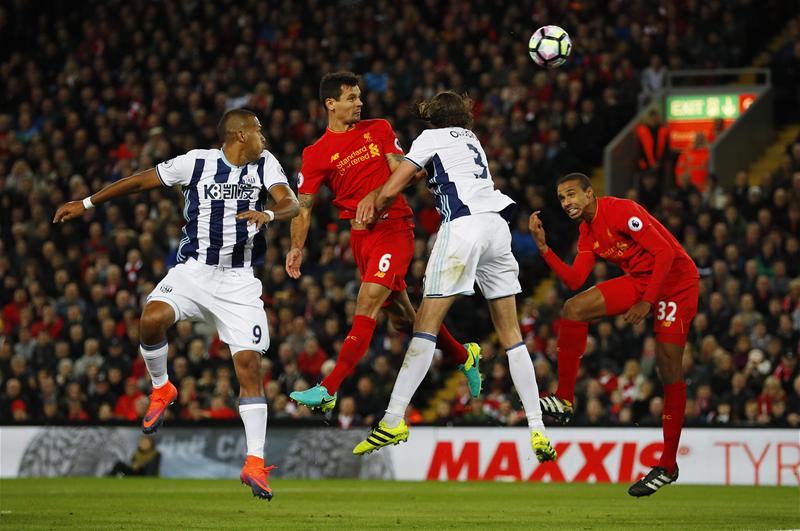 The Liverpool defence failed to deal with it and again, Lovren was guilty in both United’s goals. He was completely outmuscled by Romelu Lukaku, who won the header and Marcus Rashford scored the opener for United.

For the second goal, Lovren stayed tight with Lukaku but failed to unsettle him as the big Belgian won the header and Rashford, after the brief intervention of a block challenge on Juan Mata, scored. An improved second-half showing wasn’t enough for Klopp’s men to salvage a point at Old Trafford.

In the Champions League quarter-final win over Manchester City, Lovren was solid and vigilant. That performance was touted as the turning point in his career but following his error against Roma, it turned out to be just one of several false dawns.

However, the faults and mistakes are not entirely down to Lovren. He plays in a system where a defender is ought to get isolated. Such has been the pattern of Klopp’s play – excellent, cohesive and expansive attacking football at one end and on the other – patchy, schoolboy and uninspiring defending. That is the risk Klopp takes into every game.

Despite being at the helm for nearly two and a half years, which is ample time to improve his team’s defending, Klopp has only focused on making the attack thrilling. Defensively, his team is still naïve.

While Virgil Van Dijk has brought a sense of authority to Liverpool’s backline, there is a clear need for further changes. Van Dijk’s arrival has helped Lovren a bit but the Croatian is not a world-class centre-half. He has been awful and doesn’t inspire confidence but Liverpool’s defensive holes are a collective phenomenon which needs to be addressed by Klopp.

That said, it is time for Liverpool to move on from Lovren at the end of the season.