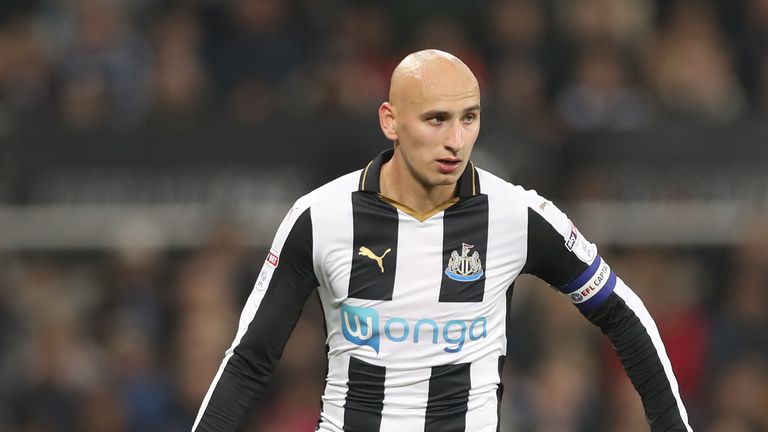 Jonjo Shelvey’s career has had many ups and downs, with the downs taking the shine off of the fantastic ability he has as a footballer.

Incidents at Swansea City are a prime example of this. As 2014 drew to a close, he saw a straight red in a goalless draw against Everton and little over a month later received his second ban of the season – four months this time – for elbowing Liverpool midfielder Emre Can.

That wasn’t the end of controversy at Swansea, and he became involved in an argument with a Swansea fan during the club’s shock 3-2 defeat to League Two side Oxford City where he invited the fan to meet him after the game for a fight!

It was looking like he had turned things around at Newcastle in this respect, he had begun to show he was growing up and even spent periods of last season as the Newcastle United captain.

Unfortunately, that hasn’t lasted long. Things have been plain sailing for Newcastle this season, and it has come as a surprise to them to hear that Jonjo Shelvey has been charged with misconduct in relation to an incident with Moroccan midfielder Romain Saiss during the clubs 2-0 loss at home to Wolves in September.

Such is the nature of the charge – it is racially aggravated – that he faces up to a 5 match ban. And this could do real damage to Newcastle’s season at a time when a run of games up to Christmas could effectively put them out of reach. Or drag them right back into a fight with the chasing pack.

Such is the talent of the shiny headed midfielder, that despite the quality of their squad, Newcastle has nobody capable of stepping into his shoes and control a game in the way that he does. The most likely move is for summer signing Mo Diame to drop back and play in the central midfield role that Shelvey currently occupies. The Newcastle midfielder has a great engine and is at home playing as a box to box midfielder.

But neither he or anybody else in the league for that matter, can control a game with their passing in the same way that Shelvey can. So it is possible that Newcastle will become a totally different proposition without their playmaker to control the game.

On paper, even without Shelvey, Newcastle have an embarrassment of riches at Championship level. Their forward line is above and beyond any of the other clubs around them, so they should be OK.

But whether they will win games with the consistency that they’re currently showing remains to be seen. It will require Benitez to have a big rethink on his tactics.

One possible change for the Spaniard is to bow to recent pressure to play both Gayle and Mitrovic up front and switch to a 4-4-2 formation. They may miss the passing range of Shelvey, but that could be balanced by the threat of the front two.

But whichever way you look at it. Jonjo Shelvey is sure to be a massive loss.