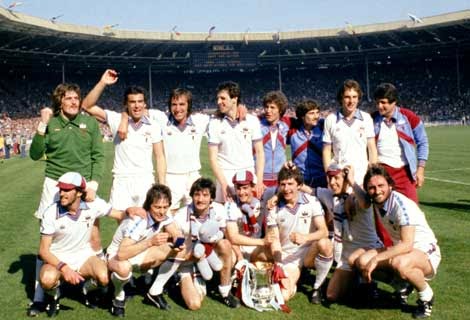 The season was 1979-1980.  West Ham were sitting in Division Two (now known as The Championship).  They were relegated there in 1978.  Finishing 5th in 1979, they were desperate to return to the top flight. But this edition of A Moment in Time is not about their league performance that season, although it is relevant, as West Ham didn’t make promotion that season either.  But they did reach the FA Cup Final.

West Ham’s two FA Cup triumphs had been a 3-2 win over Preston, after coming back from 1-2 down, Ronnie Boyce scoring the winner in the 90th minute.  In 1975 they were up against Division Two side, Fulham, who contained Bobby Moore and Alan Mullery.  West Ham won 2-0 with Alan Taylor scoring both goals. West Ham were managed by John Lyall.Lyall had been youth team coach from 1967 and moved up to the top job when he replaced Ron Greenwood in 1974.

After relegation from Division One, Lyall attempted to rebuild the side, spending £565,000 on Phil Parkes (QPR), a world record for a goalkeeper, and £430,000 on Ray Stewart (Dundee United), a British record for a teenager. 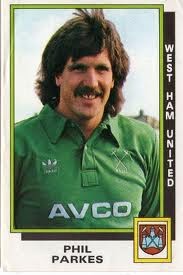 Phil Parkes (age 29) – Spent two years at Walsall, before he moved to QPR where he made his name.  Joined West Ham at the start of the 1979-80 season, when he became the most expensive goalkeeper in the world. 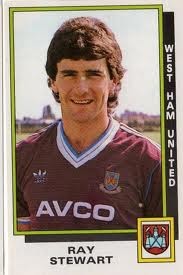 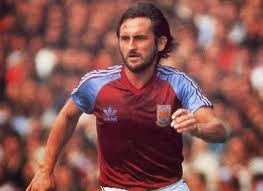 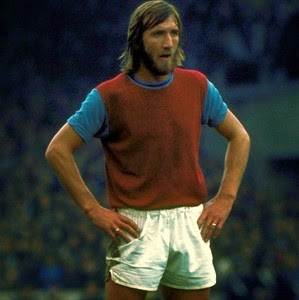 Billy Bonds (age 33) – Club captain, joined West Ham in 1967 after a couple of years at Charlton.  Made over 650 appearances for the club. 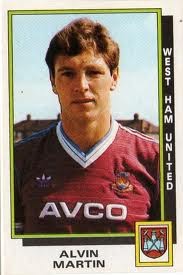 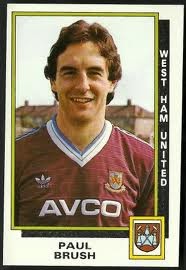 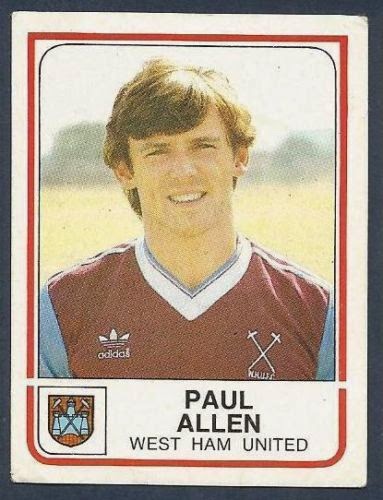 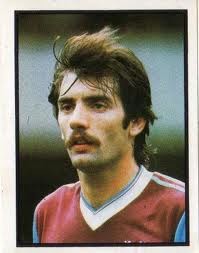 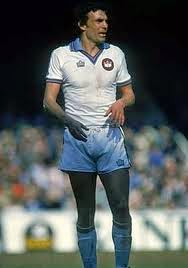 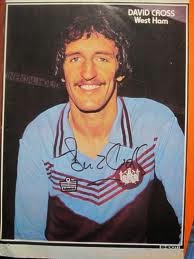 David Cross (age 29) – Began his career with Rochdale in 1969, before spending a couple of seasons at Norwich, Coventry and West Brom each.  Moved to West Ham in 1977. 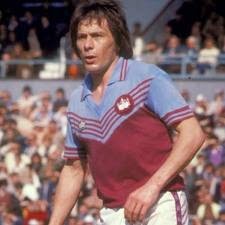 First opponents for West Ham were Division One side, West Brom, who were losing Semi-Finalists in 1978 and finished 3rd in Division One in 1979.  But 1979-80 wasn’t quite proving to be the season Baggies fans had hoped and they were 6th from bottom.  They were on a run of 1 win in their last 8 and had just been beaten 0-4 at Ipswich.  That sort of form was ripe for an upset, and so it proved.  West Ham were lying 8th in the Second Division, having just beaten Leyton Orient, 4-0.  Former Man Utd striker, Stuart Pearson, gave the Hammers a first half lead but then Cyrille Regis grabbed an equaliser and the tie needed a replay. Three days later, the two met at Upton Park and after a goalless first half, Geoff Pike turned in Brooking’s cross for the opening goal.  West Brom pressed for an equaliser but then West Ham hit them on the break as a great run from Alan Devonshire, all the way from box-to-box, saw him cross for Brooking to fire it in.  Tony Brown headed in a late consolation goal, but West Ham had pulled off a shock result.

The 3rd Round, saw two of the giant-killing results of cup history as non-league, Harlow Town, beat Leicester City, including Gary Lineker and Alan Smith, after  a replay. Leicester would go onto win Division Two that year.  Then, Halifax (Div 4) beat Manchester City (Div 1) against a City side which included two of the most expensive players in English football at the time, Michael Robinson and Steve Daley.  City had spent big, but not wisely, that season and that result spelt the end for manager, Malcolm Allison.  Chelsea (Div 2) were beaten at home by Wigan (Div 4).  Holders, Arsenal were taken to a replay by Division Two, Cardiff City, before winning at Highbury.

Next up for The Hammers, wasLeyton Orient, who were in the bottom half of Division Two. Orient were captained by former Hammer, Tommy Taylor, and also included Billy Jennings, both of whom were in the team which won the cup in 1975.  West Ham had beaten Orient, 4-0 in the League, just before the Third Round where both sides went through after replays, with Orient only just getting past non-league Altrincham.  West Ham Billy Bonds conceded a penalty in the first half and Tommy Taylor stepped up to take it.  He beat Parkes and Orient took the lead. West Ham were level when Nigel Gray headed past his own goalkeeper, and then Ray Stewart converted a penalty to give the visitors the lead at the break.  John Chiedozie then levelled late in the game, before Stewart grabbed his 2nd of the game inside the final 10 minutes, and West Ham were through.

Harlow Town’s dream cup run came to an end when they went down 3-4 to near neighbours, Watford.  Swindon Town took Tottenham to a replay before losing at White Hart Lane, and a similar fate was suffered by Cambridge United against Aston Villa.

Another Division Two opponent was next up for West Ham.  Swansea City were the visitors to Upton Park as West Ham were at last drawn at home in the cup this season.  Swansea, including ex-Liverpool players, John Toshack and Ian Callaghan, had seen off First Division Crystal Palace and Reading, who were then in the Third Division.  The game looked to be heading for a replay when 5 minutes from the end, Paul Allen and David Cross scored within 60 seconds of each other, and The Hammers marched on.

There were no real surprises, other than Watford (Division 2) went to Wolves (Div 1) and beat them easily, 3-0.  Liverpool, Everton and Ipswich all went through without too much trouble, but Arsenal and Aston Villa both needed replays to progress.

After two Second Division opponents, West Ham were back to Division One for their Quarter-Final challenge.  Aston Villa were 5th in Division One, and on a run of just 1 defeat in their last 8 in the League.  They were confident of seeing off another opponent from Division Two, having already knocked out Bristol Rovers and Cambridge United and then in the Fifth Round they put out Third Division Blackburn Rovers in a replay.  Villa had gone out at the Third Round stage for the previous two seasons and hadn’t reached the Semis since 1960.

A typically combative cup tie was goalless right up to the final minutes.  The tension was palpable when Villa defender Ken McNaught was adjudged to have handled the ball and West Ham were awarded a penalty.  Whilst some of his teammates couldn’t watch, Ray Stewart coolly stepped up and slotted it home, for a dramatic win.

All four matches were separated by just 1 goal, as Arsenal won 2-1 at Watford, Evertonbeat Ipswich, 2-1 and Liverpool beat Tottenham, thanks to a great goal from Terry McDermott

With three First Division sides in the draw, West Ham were going to have a tough tie whoever they met.  Although, Everton were 4th from bottom and represented possibly an easier task than either Liverpool or Arsenal, who were both in the top 4.  Everton had put out lower league opposition in Aldershot, Wigan and Wrexham, scoring 12 goals.  Then they beat Ipswich in an exciting Sixth Round tie.  West Ham’s form since the Sixth Round was awful as they’d picked up just 3pts from 7 matches.

The first game at Villa Park, was quite open, as both sides created good chances.  The game was a feisty affair with two ex-Man Utd players getting the goals.  Brian Kidd converted a hotly disputed penalty for Everton, and then Stuart Pearson equalised for West Ham.  Kidd was later sent-off, for the 2nd time in the Cup that season.  Paul Allen had a goal ruled out for offside and so the tie went to a replay.

The replay was the following Wednesday, at Elland Road.  This game was no less competitive or dramatic.  The game was goalless for 90 minutes, but early in extra time Alan Devonshire scored a fine goal to give West Ham the lead.  With 7 minutes to go and Everton equalised through Bob Latchford.  The game looked to be heading for another replay before West Ham threw men forward and Frank Lampard found himself in the right place to head an unlikely winner.  His goal celebration involving dancing round the corner flag was the stuff of legend.

The other Semi-Final was another really tight match-upbetween Liverpool and Arsenal. Liverpool, the reigning League Champions, and top of the league again that season, and Arsenal, the cup holders.  The first game, at Hillsborough ended 0-0.  The replay at Villa Park ended 1-1.  No penalty shootouts in those days, so a 2nd Replay occurred at Villa Park, two weeks later, but that also ended level, 1-1, as Kenny Dalglish scored a dramatic equaliser in injury time.  Arsenal finally saw off Liverpool as Brian Talbot got the only goal of the game at Highfield Road, just 9 days before the final.

West Ham were the 4th club in 8 years, from outside the top division to reach the FA Cup Final.  Sunderland had beaten Leeds in 1973, Fulham had lost to West Ham in 1975 and Southampton had beaten Man Utd in 1976.

Arsenal were appearing in their 3rd consecutive final. They lost to Ipswich in 1978, and beat Man Utd in a dramatic finish in 1979.

Arsenal were full of internationals, and mainly Irish ones.  Liam Brady, Frank Stapleton, David O’Leary and John Devine for Republic of Ireland.  Pat Jennings, Pat Rice and Sammy Nelson for Northern Ireland.  Not to mention, Willie Young (Scotland) and Graham Rix and Brian Talbot (England).  They had a deadly strike partnership in Stapleton and Alan Sunderland.

But West Ham had stars of their own.  Billy Bonds, Trevor Brooking and Frank Lampard were remaining from the 1975 Cup triumph.  Stuart Pearson had won the Cup with Man Utd in 1977.

The game was anything other than a classic (although Hammers fans would remember it forever), Arsenal were traditionally a defensive minded side.  12 minutes in and Alan Devonshire found some space down the left.  His cross fell to David Cross, whose shot hit Willie Young and bounced to Stuart Pearson, on the right of the 6-yard area.  Trevor Brooking, by now, had ghosted into the 6-yard box.  Pearson shot across the goal and Brooking got his head to it, and it went in.  A great start for the underdogs, and just what the game needed as Arsenal now had to make the running.

Arsenal had the better of the chances, but were unable to beat Phil Parkes in the West Ham goal.  As the game went on, it just had that look of not being Arsenal’s day, as West Ham were able to repel anything the Gunners threw at them.  With minutes to go, Paul Allen broke clear of the Arsenal defence and was one-on-one with Pat Jennings, but just as he reached the “D”, Willie Young cruelly tripped him from behind and the chance had gone.

Paul Allen, 17 years old, was the youngest player to have played in a cup final at that stage.  Young only received a yellow card, as the tackle from behind had not been outlawed then.  Mums everywhere immediately took the baby-faced Allen, to their hearts.

West Ham had beaten Arsenal, and they remain the last club from outside the top division, to have lifted the FA Cup.

Despite the disappointment of not doing better in the League, West Ham also reached the Quarter-Finals of the League Cup, losing to eventual runners-up, Nottingham Forest, in a replay.

The following season, they won the Second Division by 13pts.  They reached the final of the League Cup and lost to Liverpool in a replay.  They also reached the Quarter-Finals of both the FA Cup and the Cup Winners Cup.