Celtic continued their march towards a historic second domestic treble after they thrashed bitter rivals Rangers 4-0 in the semi-finals of the Scottish Cup at the Hampden Park on Sunday.

The Hoops, who have already bagged the Scottish League Cup and are on the verge of winning the Scottish Premiership once again, set up a cup final date with Motherwell as goals from Tom Rogic, Callum McGregor, Moussa Dembele and Olivier Ntcham completed the annihilation of Graeme Murty’s side at the national stadium.

The result means that Celtic are unbeaten against the Gers in ten games across all competitions. Here are three major talking points from the derby on Sunday.

Speed in transition the key for Celtic

Celtic have continued to exercise their dominance on the domestic stages once again but most fans would agree that Brendan Rodgers’ side haven’t been as fluent or flamboyant as they were in the treble-winning campaign last season. One of the major criticisms that has been levelled at the Bhoys this term is that they have, on many occasions, looked slow and the build-up play has been laborious at times.

However, that wasn’t the case at all at the Hampden Park this weekend as Celtic were out of the blocks very quickly, looking like they meant business. They were moving the ball at pace, the transition between defence and attack was happening quickly. There was a purpose in their play. The frenetic start to the game seemed to have taken the Gers by surprise who never really recovered from the setback.

One of the major defining points of the game came when Rangers’ centre-half Ross McCrorie was given the marching orders by referee Bobby Madden after the academy graduate fouled Celtic striker Moussa Dembele inside the box. At that time, the scoreline read 2-0 in favour of Celtic but Rangers had started the second half brightly and were still in with a chance to alter the course of the game.

However, that moment of rash decision from the youngster sounded the death knell for the Gers as they were down to ten men and Dembele stepped up to convert from the penalty spot to make it 3-0. The game was over. McCrorie is an exceptionally talented defender, no doubt, but that mistake on Sunday proved to be a costly one for his team. 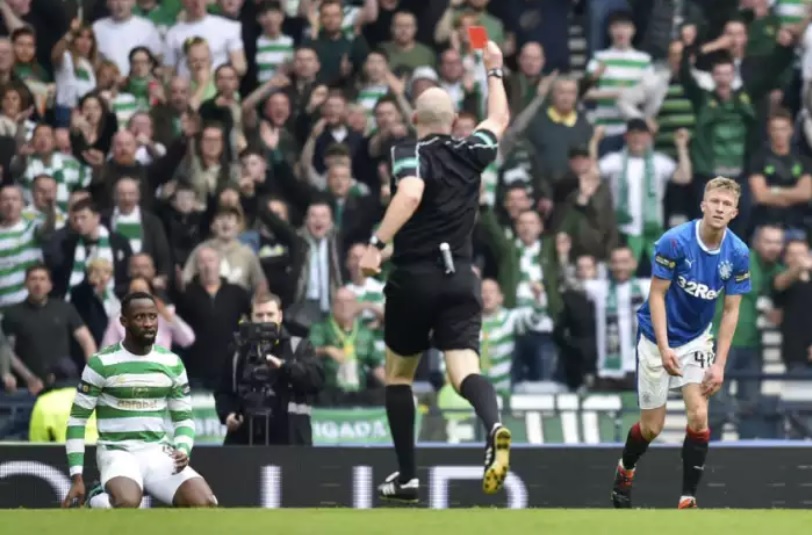 Scott Brown is the man for the occasion

The Celtic captain is enjoying a fine 2017/18 campaign and has emerged as the strongest contender to take home the Player of the Year award. He did his chances no harm on Sunday, with another majestic performance in the middle of the park for the Hoops.

The 32-year-old was immense for Rodgers’ side as he bossed his Rangers counterparts Greg Docherty and Graham Dorrans in the middle of the park, never really allowing them to get any sort of foothold in the game. It was a disciplined, strong and an authoritative performance from the Hoops skipper that played a big role in the comfortable manner of their victory.