Rangers 0-0 Villarreal: The Gers stay alive in the competition

Rangers remain in the hunt for the Europa League last 32 after Steven Gerrard’s boys survived 45 minutes with 10 men to claim a vital point against Villarreal.

The Gers were reduced to 10 men just before the break when Daniel Candeias was shown a second yellow for a foul on Santiago Caseres. It was a controversial red card but for the second time in this campaign, Rangers held their nerves and frustrated Villarreal by holding them to a 0-0 draw at the Ibrox.

Steven Gerrard’s men started on the front foot and could have enjoyed a flying start but Scott Arfield hit straight to goalkeeper Andres Fernandez from 12 yards out. Villarreal’s response was immediate; Karl Toko Ekambi burst into the box but Carlos Bacca could not provide the finishing touch as the Cameroonian fired across goal.

Alfredo Morelos saw a neat flick at the near-post bounce over before Ekambi made a complete mess of Bacca’s clever cut-back from the right flank.

Rangers had the best chance in the first half to put their noses in front as Arfield clipped a cross to the back post and Joe Worrall nodded down perfectly, but Goldson slashed his shot over the bar. The hosts could have dearly paid for their miss and had to thank their goalkeeper McGregor, who made two outstanding saves off Ekambi to prevent Villarreal from taking the lead. 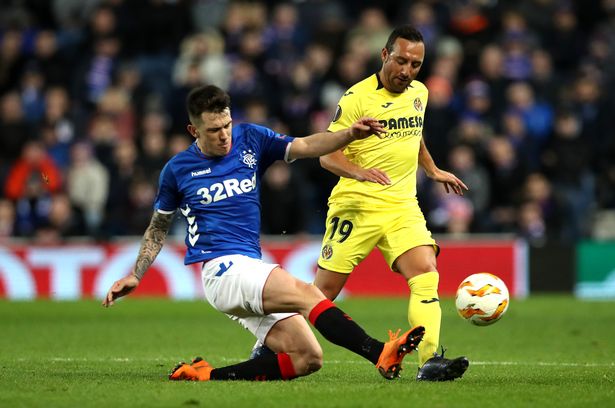 McGregor first raced off his line to deny Ekambi brilliantly before producing a vital save with his right hand just before half time to keep the scoreline 0-0. Those two outstanding saves from McGregor should have given the Gers a lift but Candeias’ red card certainly gave Villarreal an advantage heading into the half time.

Rangers, following their numerical disadvantage, created very little in the second half and rode their luck at times at the back. McGregor bailed Rangers again by denying Mario Gaspar’s shot before keeping out Ekambi again. The Ibrox roared 14 minutes from time when Glenn Middleton put the ball in the back of the Villarreal net, only to be ruled offside.

Kyle Lafferty replaced Morelos and immediately tested Fernandez with a rasping left-footed drive from the edge of the penalty area. Villarreal upped the ante in the final stages of the game, forcing the Rangers players to put their bodies on the line.

McGregor was again called into action as he denied Samu Chukweze, while Ramiro Funes Mori wasted a glorious chance to win it for Villarreal at the death.

Following a gritty 0-0 draw at Ibrox, here’s how some Rangers fans reacted.

The referee was shocking

One win and we’re through

Was bricking it lads, well deserved point. Difficult being against 12 men.

Well done will take that 🔵

Chance to top the group still. Beyond proud of this team.

Effort to be proud of there 👏🏻

What a point!!! ⚽️
10 men against Villarreal!!! 🔟
One win and we’re through 🏴󠁧󠁢󠁳󠁣󠁴󠁿🇬🇧🏴󠁧󠁢󠁳󠁣󠁴󠁿

Thank fuck for McGregor. That defense is honking. Worrall and Flanagan shouldn’t be near the team.