The World Cup is fast approaching and it’s difficult not to be excited about it, even while the domestic season is in full flow. With the tournament taking place in Brazil, the obvious favourites are the hosts and Argentina, who will both be targeting to go all the way in the summer. Lionel Messi will never get a better chance to add a World Cup to his list of honours and to be known as the best player of all time, he may need to lead Argentina for victory this summer. The big hopes from Europe come from reigning champions Spain and Germany, who impressed at the last competition, but there are a few teams who could cause a surprise. I’ll look into three sides who could come from nowhere to lift the trophy in Rio.

France have always been a very unpredictable nation when it comes to International tournaments. They lifted the trophy in their own country in 1998, but they then flopped in 2002. In 2006, they reached the final, but then in 2010, they flopped again. If this pattern continues, the French national side will be going a long way in the competition this summer. They currently sit in 18th place in the FIFA world rankings, therefore they go into the competition with little pressure on them, but they have the players to compete with every nation that will be in Brazil this summer. They showed their quality recently in a friendly against 2010 World Cup finalists Holland, winning the match 2-0 with goals from Karim Benzema and Blaise Matuidi.

They have an array of very talented players as usual, but the difference with this squad is that they appear together without any unrest. An interesting omission from the recent squad was Samir Nasri, but that may have been done for the good of the squad as the Manchester City player is known to be a troublemaker and he may not be the type of person that Didier Deschamps can rely on at a tournament. France have a mixture of youngsters and experience players, both of whom are important to have in a tournament environment.

Deschamps will build his side around the core of Hugo Lloris, Patrice Evra, Yohan Cabaye, Blaise Matuidi, Franck Ribery and Karim Benzema. They don’t have an experienced centre half, which could be a problem in Brazil, but Eliaquim Mangala and Raphael Varane who played against Holland are both very talented young players.

Mathieu Debuchy has been one of the Premier League’s best right backs this season and he is likely to start ahead of Bacary Sagna. They will also have Olivier Giroud and Loic Remy to provide the back up to Benzema, both of whom have been clinical in the Premier League this season. It’s clear to see France have a very talented squad who are hitting form at the right time.

They were lucky in the draw as they will be going up against three teams they should beat in Switzerland, Ecuador and Hondurus. If they make it out of the group as expected, anything can happen and France have the options to change their style of play to suit their opposition. Franck Ribery will be particularly key as he seeks to bring his domestic form to the World Cup stage. 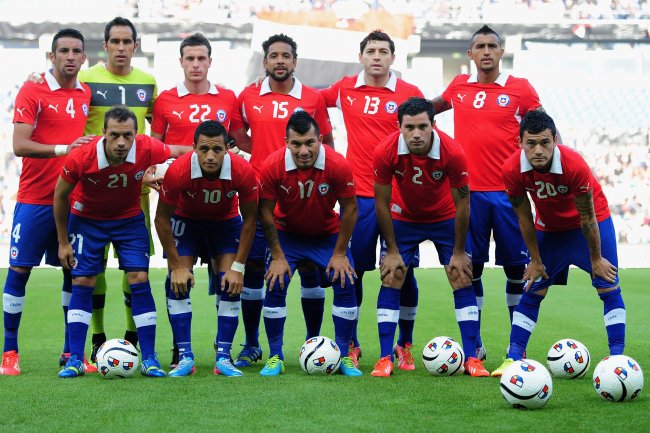 Chile have shown themselves to be a very good outfit in recent months after playing friendlies against some of Europe’s best sides. Last week, they were narrowly beaten 1-0 by Germany, but the South Americans were very unlucky as they dominated for large portions of the match. Their 2-0 victory over England did gain a lot of headlines, but it wouldn’t shock anybody who has followed the results of the Chilean national side. They have regularly competed with the best sides in the world over the past year and that is likely to continue in the summer. Their chances are enhanced given the location of the tournament as their players will be used to the climate in Brazil, unlike the Europeans. In Europe, Chile have competed admirably. In Brazil, they will be even better.

They have been placed in a very tough group as they are set to face Holland, Spain and Australia. The untrained eye will see this as an easy task for the two European sides, but Chile have already showed they can compete with these sides. Last September, they played Spain in a friendly and came out with a 2-2 draw, taking the lead twice. It took a stoppage time equaliser from Jesus Navas to prevent Chile winning the match in Geneva. When the two sides meet again at the Maracana, it wouldn’t be ridiculous to consider Chile as favourites.

Chile are currently placed 14th in the FIFA world rankings, showing their quality. Their squad isn’t filled with superstars, but they have some very good players. Chile’s success is built around their tactics and fluidity which has caused Europe’s elites a lot of problems. The standout player is Barcelona forward Alexis Sanchez, who netted both goals against England, but he is assisted by Eduardo Vargas (Valencia), Mauricio Isla, Arturo Vidal (both Juventus) and Gary Medel (Cardiff). The Juventus pair are particularly very talented and may be looking to use the World Cup as a platform to gain a move to a bigger league. Chile also have a number of players who ply their trade in South America, which will be an advantage this summer as they will already to suited to the conditions.

Belgium have been lauded as the next great side to come out of Europe as they appear to be bringing through their ‘Golden Generation’. This is the first tournament they are going to since 2002, therefore the majority of players are going into this summer with no experience of an international tournament. They do have the quality to make a real impression on international football this season. Although their best chance of a competition win may not arrive until Euro 2014 or the 2016 World Cup, if things go their way in Brazil, they have the talent to lift the trophy. They are currently the 11th ranked side in the FIFA world rankings which shows the form they have been in over the past few years.

They have a very strong core to their side in Thibaut Courtois, Vincent Kompany, Daniel van Buyten, Axel Witsel, Marouane Fellaini, Eden Hazard and Romulu Lukaku. They also have a plethora of other players, who can all add something to the line up. Obviously a lot of Belgians have impressed in the Premier League, but there is lots of talent placed around Europe that could play a key role in Brazil. Toby Alderweireld, Axel Witsel, Radja Nainggolan and Dries Mertens are all very accomplished players who will complement the Premier League core to the Belgian squad. There is a lot more Belgian players popping up across Europe showing that they can keep on producing top quality players. The two youngsters that stand out as potential players who could gatecrash the squad are Thorgan Hazard and Michy Batshuayi, both of whom will have a big part to play in the long term future.

They have been drawn in a group that provides a very favourable chance of progression as they are set to play Algeria, Russia and South Korea. These three matches should allow Belgium to ease into the competition while getting used to the conditions of South America. If they qualify as they should, they will then be in a great position to attack the knockout stages with little pressure on the side as nobody expects them to come into the competition and win it. A lot of hype has been built around this Belgian side, but their recent 2-2 draw against the Ivory Coast showed that they still have a long way to go to become one of the world’s best sides. This summer may be a little too soon for Belgium, but they certainly could do some damage.