Wednesday was a day that began with joy and happiness for Liverpool, but ended on a gloomy note. While Liverpool were trailing 1-0 in the semi-finals of the EFL League Cup, there was a sense of positivity and a vibe of confidence around Anfield. There was a belief that the deficit could be overturned and Wembley was well within reach because the Reds hadn’t failed to score in successive League Cup games since August 1979 and they hadn’t tasted defeat in back-to-back competitive games at the Anfield since October 2012. But records are made to be tumbled. Shane Long struck late in the game to confirm Southampton’s place in the final showdown at the Wembley, as they frustrated Jurgen Klopp’s men across 180 minutes, to become the first team to make it to the finals without letting in a single goal in the tournament.

The day started with the Kop hearing the good news of talisman Philippe Coutinho signing a new five-year contract with the club, thwarting the advances of Barcelona. And then later it was confirmed that defender Joel Matip will be returning to the starting XI. The Cameroon international had last started a game for Liverpool in December, in the 2-2 draw against West Ham. But injury and some administrative roadblocks prevented him to feature for some length of time.

Yet the ending wasn’t what the Reds’ supporters would have envisaged as the day finished with their team losing to the Saints, who until Wednesday night, had only won thrice away from home this season in all competitions. While most will opine that it was Southampton’s solid defensive shape and their resolute and dogged defending over the two legs that stopped Liverpool from progressing, that would not be the complete truth. The absence of summer signing Sadio Mane has proven to be much harder to deal with than what was originally expected.

Mane is currently away on international duty with Senegal, participating in the Africa Cup of Nations where they will be facing Cameroon in the quarter-final stage. With Ivory Coast eliminated from the competition already, Senegal are the favourites to bring home the trophy, and if they progress as far as the finals, Liverpool will be without their summer signing until early February.

As impressive as Roberto Firmino and Coutinho have been, they haven’t had the same influence that they did playing alongside Mane and that has reflected in the Reds’ recent results. The loss to Saints on Wednesday was the ninth game of the season that Mane hasn’t started for Liverpool and they have won only three times in these matches, all three coming in cup ties, against Derby, a weakened Tottenham and an FA Cup replay victory over Plymouth.

On comparison, of the 21 matches that the Senegalese has started for Liverpool, they have gotten better of their opponents on 15 occasions. It is obvious that the 24-year old had a stellar start to life at Anfield, having already netted nine times along with four assists, that sees him getting a WhoScored.com rating of 7.57, which is the seventh best in the league this season. And there are no doubts that he will soon hit double figures in terms of goals for the third season running, upon his return to club duty. Coutinho and Firmino too are in the top-ten rated Premier League players according to Whoscored.com, indicating the impact the trio has had in the English top-flight this term.

However, without Mane, Liverpool fail to have the similar impact in the final third of the pitch, as they miss the pace and the running behind the defences that he offers. The Reds have scored the most number of goals in the league this season (51), but without Mane, they lack a quality replacement to fill in and maintain the same goal threat. In the 21 games that Mane has started, Liverpool have scored 55 goals averaging a healthy 2.6 strikes per game and in the nine that he hasn’t started, the Reds have just scored 10 times at an average of 1.1 goals per game. The dynamism and the extra yards of pace that Mane brings is a huge feature of the way Liverpool play in the final third of the pitch and without him, that area becomes less of a threat. 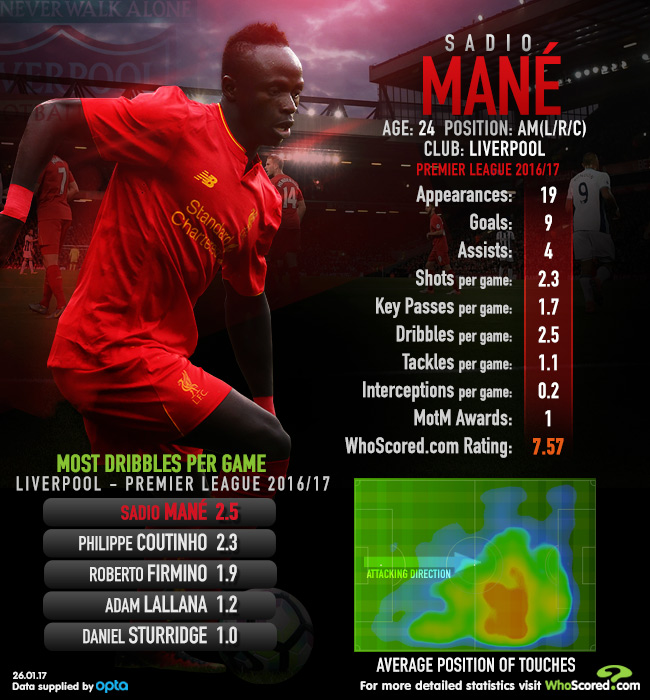 The 24-year-old averages more dribbles per game (2.5) than any other Liverpool player, reinforcing the fact that he is explosive with the ball at his feet. While Daniel Sturridge is no doubt a talented striker, he has struggled to convince under Klopp’s setup at Liverpool, where the German requires his attackers to switch and shuffle across all the three attacking positions. And he was once again caught struggling against the Saints where he managed only four shots, out of which only one was on target, getting a WhoScored.com rating of 5.94 only, despite playing for the entire 90 minutes.

Sturridge isn’t as fluid as the likes of Firmino, Coutinho and Mane, meaning he tends to occupy the central space. The other option, Divock Origi, is a stronger physical presence than the Englishman, but still fails to have the similar impact as Mane. With them tending to stay in a particular area, without offering the constant movement out wide or dropping deep, it becomes easier for opponent defenders to mark them out of the game and render them ineffective, which is a big part of why Liverpool are struggling at the moment.

After ending 2016 on a high, with wins over derby rivals Everton and Manchester City, the start of the new year has been nightmarish for the Reds. With Wolverhampton Wanderers up next this weekend in the FA Cup, Liverpool will be hoping to wake up from their slump, before the key encounter against Chelsea in the coming week in the Premier League. They must rise to the occasion and prove that they are still a force to reckon with, even with Mane’s absence. However, after having seen their attack grow blunt and ineffective over the past weeks, the Senegalese international’s return from Gabon cannot come sooner enough for the Reds.