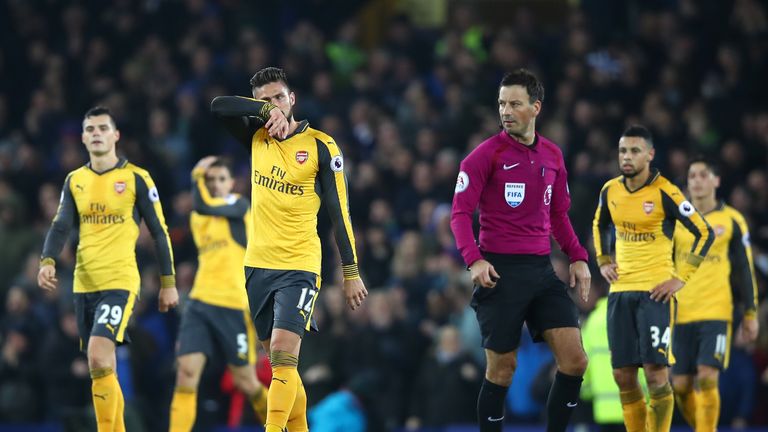 Arsenal were made to taste defeat at Goodison Park on Tuesday, as Ronald Koeman’s Everton sealed a late comeback 2-1 win over the Gunners.

Alexis Sanchez had given Wenger’s side an early lead in the first half, but Seamus Coleman made sure both teams went on level terms at half-time with a header minutes before the break. Summer signing Ashley Williams, in the 86th minute, rose high to head in from a corner and sealed the three points for the Toffees.

It was only the second defeat of the season for Arsenal, while it was a much-needed win for Everton, following some poor results in the past weeks. Let’s take a look at three talking points from the game:

Coming into the game, Arsenal were in the second place in the league table, three points behind league leaders Chelsea. And a win would have seen them go to the top of the table, albeit for only a day, but Wenger’s men failed to make it count at Goodison Park.

The Londoners had their share of chances and should have closed off the game easily, but having failed to capitalise on the opportunities, they seemed to drop their intensity at crucial times. They conceded free-kicks in dangerous areas, possession was turned over cheaply and the game slowed down considerably.

Chelsea will play Sunderland on Wednesday and in all likelihood, will win the game, but if David Moyes’ side do manage to get a positive result, Arsenal will have nobody but themselves to blame for missing a golden chance to go to the top.

Ashley Williams was signed by Everton from Swansea for a fee of £9 million in the summer, and the transfer is proving to be a masterstroke. The Welsh defender has been solid as a rock in defence for Everton and has been extremely consistent in his performances despite a run of poor results for the Merseysiders.

And he was at it again on Tuesday, as he proved his worth with a well-taken header to help his side emerge victorious. It was his first goal for the Toffees and it couldn’t have come at a better time. He also showed his strength late in the game, to thwart Arsenal from equalising after being involved in a goal-mouth scrap. In his short time at the Goodison Park, Williams has become a key man for Ronald Koeman and Everton as they chase their European dreams.

Mesut Ozil, along with Alexis, has been the Gunners’ best player this season. He has been a prominent figure in their recent period of success in the league and in Europe.

However, the German playmaker had a poor night against Everton as he looked out of pace throughout the game. He also missed two gilt-edged chances to put Arsenal in firm control of the game, chances that he would have normally taken with ease. Having featured so heavily for the North Londoners, Ozil could do with a rest given how gruelling the Christmas schedule can be.

However, with Manchester City up next, he will need to bounce back from the poor display and be at top form against Pep Guardiola’s side in the weekend for Arsenal.