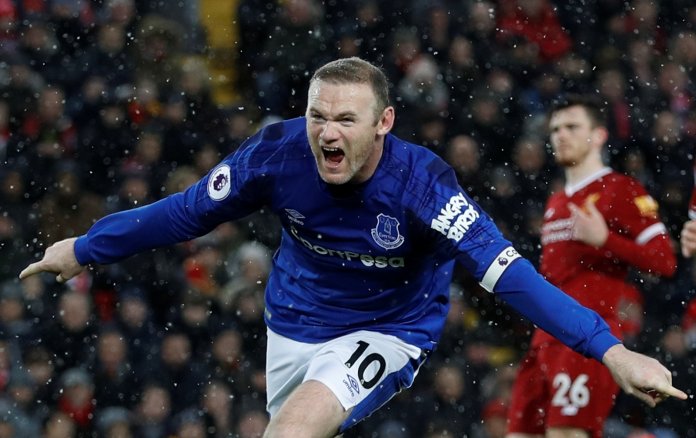 Wayne Rooney has admitted that he wants to manage Everton following the conclusion of his playing career. The former England striker returned to boyhood club Everton last summer after spending 13 years at Manchester United, where he won 5 Premier League titles, an FA Cup, 3 League Cups, the Europa League, and the Champions League, and finished as the club’s record scorer as well.

Despite having returned to Everton only last summer, the 32-year-old appears to be planning for the next stage of his career that saw him captain England and hit a record 53 goals in 119 international appearances.

“The main thing I want to have a go at is management,” Rooney was quoted by the Telegraph.

“I would love to stay at Everton in a coaching role or hopefully be manager one day.

“It is something I want to do, to stay involved, but if that is not possible I will look to see where the opportunities are for me.

“I am determined to become a manager.”

Rooney left Manchester United to return to Everton in the summer of 2017 – 253 goals and 16 trophies later. He had enjoyed an illustrious career with the Red Devils that saw him break Sir Bobby Charlton’s long-standing goal-scoring records for both club and country. Rooney had won every single trophy that was on offer at his previous club and ultimately became a legend.

We are talking about a player determined to make a mark in football management after his contributions as a player to United, Everton and the England national team. It isn’t the case of Rooney walking into coaching straightaway now; the forward wants to enjoy football as a player over the next few years and then embark on a new chapter in his otherwise glittering career.

Back to the Goodison Park after proving himself at United, there are no reasons why Rooney won’t excel in management. But there have been glaring examples of bigger and world-class players often failing to make an impression as a manager.

Former United right-back Gary Neville had a horrendous time during his spell at Valencia and after just a season into management, he chose to enter punditry and has done well since then. Arsenal legend Tony Adams is another example of a legendary player failing as a manager.

There are a lot of other examples as well, who did very well during their playing careers but failed when it came to becoming a manager and devising tactics. So there are no guarantees that Rooney will be a sure-shot hit.

But the thing which is guaranteed is that Rooney, a born winner, has the tactical know-how of the game, having spent more than a decade as a player. He knows the game in and out, keeps the desire to win and just like being a leader in the team, could be a huge motivator as a manager too.

The Englishman, despite hitting more than 10 goals since returning back at Everton, has shown signs of slowing down. But when it comes to fighting for a point, put everything on the line to win a game and lead the team by example, there isn’t a better player than Rooney currently.

Rooney’s strong character and sheer determination to succeed at the top level would make him tick. He wants to do some coaching sessions with the Under 14s at Everton, which is indeed the proper step taken in the direction for becoming a coach.

But to become a successful manager, he would have to take a leaf out of the books of Sir Alex Ferguson, Arsene Wenger, Pep Guardiola or Jose Mourinho.

It isn’t just me who thinks he will do well as a manager, Crystal Palace boss Roy Hodgson feels exactly the same.

“I am not surprised about that because Wayne is good at articulating his thoughts on the game and he does have a good knowledge of the game. And he can inspire people,” Hodgson was quoted by the Mirror.

“You wouldn’t need to be difficult to inspire if someone with his record and his number of caps and goals for England – everything he’s done in the game – I think it’s enough for him to walk on the field in a training kit to inspire people. I am sure he can.

“When he gets those badges and gets his manager’s or coach’s job, I am sure he will do a very good job because he is a top-class football guy.”

After joining his boyhood club, in a few years time, Rooney could lead the boys, not as a skipper but as a manager. I can definitely see Everton appointing him as a manager in the future.