A report from The Sun claimed last month that Manchester City were harbouring an interest in Borussia Dortmund sensation Julian Weigl. However, they may have to shell out £40m to acquire the youngster’s signature.

In the past, we have seen that it is quite tough to pry promising young stars away from the Bundesliga but we are also aware of the extent of City’s financial backing. If they offer the right amount, I assume they can succeed in bringing him to the Etihad Stadium this summer.

Based on what we have seen from Weigl, it could prove to be a solid move by Pep Guardiola. A defensive midfielder by trade, the German is already a star in his own right. Blessed with sensational passing skills and an ability to effortlessly link the attack to the defence, Weigl is a quite an accomplished player despite being so young.

He is quite mature when it comes to tackling and can also make some well-timed interceptions to keep trouble from opponent attackers at bay. 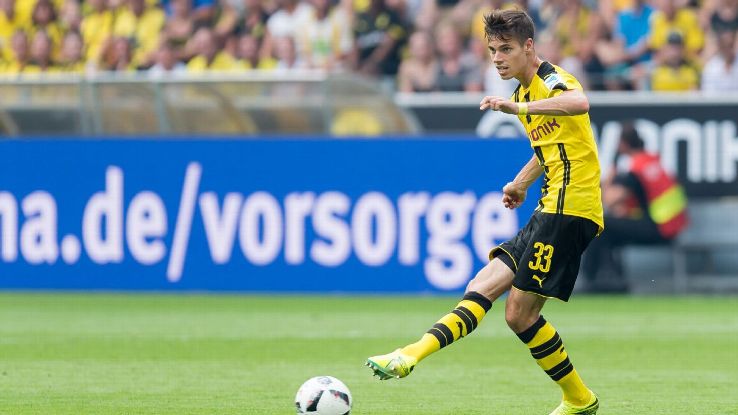 At the same time, Weigl is also proficient at supporting the team in offensive situations. An important player on the counter-attack, he can prove to be a valuable member of any squad, given they use him right. As far as City are concerned, they can most certainly use a player like him in the middle of the park.

There has been a lot of speculation about Yaya Toure’s future and although Fernandinho has been a brilliant player for City this season, the club will need a long-term replacement for him.

To that end, a move for Weigl makes absolute sense. Furthermore, having him and Fernandinho in the squad could give Guardiola a tactical advantage in the sense that he could experiment with a 4-2-3-1 formation as well. Throughout this season, the City manager has preferred utilising a 4-3-3 but with challenges set to intensify next season, he could benefit by having the option to deploy a different formation to change things up.

Furthermore, Weigl thrives in a central midfield role as well, thus making him a very interesting player worth signing. Also, Guardiola seems to have excelled at assembling a relatively young squad at Man City. A player like Weigl certainly fits into that mould, meaning this can go on to become a stronger team in the near future. Hence, given a choice, City must do everything they can land Weigl once the summer transfer window commences.